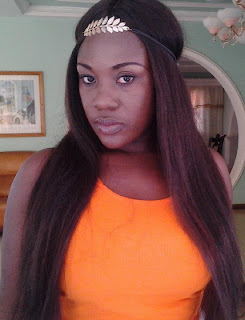 Popular Ghana-based actress Emelia Brobbey has been arrested for stealing a piece of bracelet jewelry while shopping during her vacation in London.

According to information from reliable sources, the talented actress who is unaware of the security camera at the store allegedly stole a bracelet.

As she was exiting the store, a beep alerted the people around her.

We learnt the guys on the security camera who have been monitoring her movements came out to ensure her arrest.

Police officials were called in and she was asked to provide her address.

The actress gave the officers the address of her host, fellow actress Gloria Agyeman.

The raid led to the arrest of another actress Eunice Akua Adjeiwaa who had overstayed in the United Kingdom.

She was immediately arrested. Eunice is set to be deported back to Ghana.

Emelia Brobbey who caused the whole mess is set to leave London today after she was given an immediate departure order from the UK.

OMG this beautiful babe has brought a lot of shame on herself.