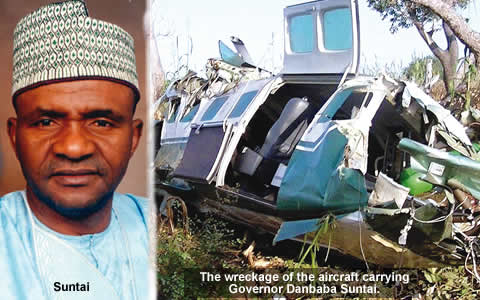 Governor Danbaba Suntai of Taraba State was the last person rescued from the crashed Cessna 208 aircraft he piloted. An official of the Nigerian Airspace Management Agency (NAMA), who participated in the Search and Rescue operations, said the governor was stuck on the cockpit at the crash site and required extra carefulness to bring him out.

“Others who sat behind him, were immediately evacuated, making him the last person to be rescued. He was stuck on the cockpit,” he said. Meanwhile, fresh facts have emerged as to what might have caused the crash.

According to a top official of the aviation ministry, the governor and his entourage allegedly disobeyed the flight rule of Yola Airport, which, at the moment, operates a sunrise to sunset arrangement, as it does not have night operations facilities. Consequently, the airport closes at about 6pm, but the governor and his team radioed Air Traffic Control in Yola that they will be arriving by 6.45pm.

This made the ATCs to await their arrival. Five minutes to the expected time of arrival, the ATCs lost contact with the Cessna airplane. “The control tower people became worried and they alerted the Airport Fire department and immediately, a Search and Rescue operation was initiated using the coordinates of when he last contacted the tower. He established contacts with tower five minutes to landing and thereafter nothing was heard from him. Under normal operations, he was not supposed to come in at that time.

He ought to have come in before 6pm but he radioed that he will arrive by 6.45pm; so the tower was expecting him, but never got here. The airplane went down some minutes to 7pm. By right, the airplane ought to have been closed but they had to wait for them,” the source said. The source further said Suntai had no co-pilot on board and having lost contact with tower means he likely had a technical hitch, though he never at any time said he was in distress.

The source also said the airplane took off from an unmanned airstrip in Jalingo, as neither navigational equipment of NAMA nor its staff were present at the place. “So, it calls to question how he has been taking off from an unmanned airspace in Jalingo and landing in Yola. So, who has been clearing him for takeoff from an airstrip without air traffic services,” he queried. Officials of the Accident Investigations Bureau (AIB) have taken over the investigation and cordoned off the crash site.

A source in AIB said the bureau would reconstruct what might have probably happened and also study the black boxes. The Cessna 208 is a single turboprop engine, fixed-gear short-haul regional airliner and utility aircraft built in the United States by Cessna. The airplane typically seats nine passengers, with a single person crew, although with a FAR Part 23 waiver, it can seat up to fourteen passengers. The aircraft is also used for cargo feeder liner operations. (SaturdaySunreport)