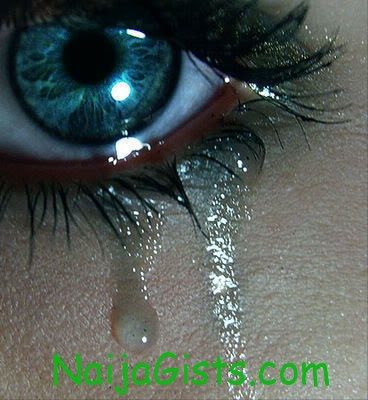 This is a painful heartbreak experience / story of a lady by the name of Gbemisola. naijagists.com

In this story, Gbemisola narrates the painful experience she had with her ex called Steve.

Read the detail gist below.

How It All Started

I met this guy Steve, when I was just 13. I was waiting for my visa cos I  was meant to continue my education abroad. He was my 1st ever  boyfriend. At 1st, he didn’t know how old I was cos I looked older than  my age. As the young girl I was,I was naïve.

He later found out how old I  was. He was 12yrs older than me. Surprisingly,he stayed on with me but  never touched me(something most men would hardly do). I then traveled  abroad to continue with my education. We would stay in contact through  e-mails & phone calls. I would come back home to naija sometimes  & on one of those occasions, he took me to meet his family.  Sometimes, we wouldn’t see each other for over a year.

When I got into Uni, I stayed faithful to him still. My friends would  tell me I’m wasting my life 4someone who’s probably cheating on me back  in naija. I didn’t care. I knew he said he would marry me so I believed  him. I thought to myself  “men always cheat”. Doesn’t mean I should do  same. As hard as it was, I stayed faithful. Guys started calling me a  lesbian. I took it knowing my man appreciated my being faithful to him.  By then, we had stayed over 2yrs without setting eyes on each other.

Finally, I relocated back to Nigeria. Before then,I had been noticing  Steve had started acting weird towards me. He wouldn’t call me till I  called him. Even when he called it would be just flashing. I was a  student. He had a job.I was the one meant to “flash”. Even though its  expensive calling naija,I would call whenever he “flashed”. For  sometime,he stopped picking my calls too.I felt all this was happening  cos he hadn’t seen me in 2yrs. I knew probably he had met another girl  but I felt it wouldn’t b a serious relationship since he wanted to marry  me & I had met his family & they would call me from time to  time.

The Shock Of My Life

When I finally moved back home, few months later. He broke the news to  me. He had gotten married & he had a kid. I was so shocked. I  couldn’t believe it. But he didn’t stop there. He told me he didn’t love  his wife. Said his family pressured him into the marriage cos they felt  I wasn’t “serious”. Said he just wanted to please his mom (his dad is  dead). He cried & begged me on his knees not to leave him. Said he  still wanted to marry me. Said the wife he married was for his mom, so  he wants to marry for himself now. He cried, begged n begged. Asked y he  never told me about the marriage. He said didn’t want me to feel disappointed in him & then leave him. Stupidly, I fell for his lies.

I never for one day asked him to leave his wife for me. That would have  been plain wrong. Even when I knew I was there b4 her. He told me he  couldn’t leave her too cos he didn’t want to hurt her. According to  him,it was his mistake so she shouldn’t pay for it. He told his family  members & friends he still planned to marry me. It made me have  confidence in him not knowing he was a liar. I was getting prepared to  meet his wife cos I wanted to get along with her. I knew it would be  hard for her like it was for me,but I was willing to put in the effort  needed. Let’s just say, I was brainwashed by him. Through all this, I  never let my family know he had gotten married cos I knew it would pose a  problem.

Well, that was years ago. I’ve finally found out that he used me. I have  a lovely daughter by him now. She’s almost 3yrs old. The scales finally  fell from my eyes after I had her. Steve changed towards me. Showed me  he did not want me or my daughter. I found out much later that he lied  about his marriage. Yes, family pressured him but it wasn’t an arranged  marriage like he claimed it was. Found out he never planned to marry me.  My daughter hardly sees her dad. Everything he told me was all lies. He  met a woman, fell in love, got her pregnant, & married her. Then I  wonder, y did he beg me to remain with him when he knew he was lying to  me?? Y couldn’t he just let me go?? Y did he keep lying telling me he  loved me?? Y??

Funnily enough, he still claims he loves & want to marry me still.he  thinks I’m still the stupid naïve girl who he could control. I realize  he just doesn’t want to see me with another man. Something snapped in  my head. I wanted revenge & wanted it badly. For all the yrs I had  spent with him which ended up being a waste of my time. By then, I had  spent a total of 13yrs with him. I hatched my plot. I slept with his  best friend(before then, I had never slept with any other man). And told  him about it. He cried, asked me y I did it. Told him it was to get him  back. Surprisingly, he forgave me. Took a while, but he did. I laughed  hard in my mind. I pretended to feel bad about what I did. Both men  aren’t friends anymore. Steve still hasn’t told his friend that he knows  we slept together.

I’m not done yet. This is just the beginning. I don’t plan to sleep with  any more of his friends but I would hurt him in a way that wldnt be so  easy for him to forgive. I want him to feel the hurt I’ve felt. Feel the  pain he made me feel & feel what’s its like to love someone &  have all your love thrown back into your face.

Funnily enough, he wants to come meet my family officially during this Easter break. I’ll play along. He can’t brainwash or mess with me again.  Sometimes, cos of my attitude towards him now, he tells me he feels I’m  not sorry for sleeping with his friend. I beg him & try to act like  I’m sorry. Hahahaha!! Other times, I tell him, yes I’m not sorry!

In conclusion, men are evil. Steve lied to me, used me as a punch bag d little times  we’d see, so its my turn now. I now know how to punch back. Where it  hurts.

Gbemisola be encouraged. Life is not fair and can never be.

The facts that Steve hurt you doesn’t make all men evil.

There are still several men today with good conscience it just takes the grace of God and prayer to meet them.

Let go and let God so you can have the peace of mind to move on.