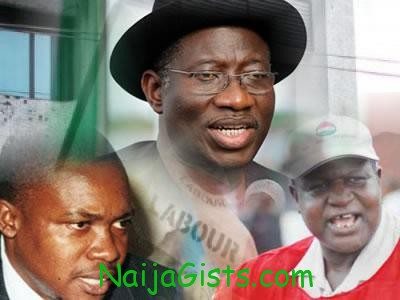 The Leaders of organised labour led by Abdulwaheed Omar, President of Nigeria Labour Congress, emerged from the meeting room where they have been meeting with a team led by President Goodluck Jonathan in the early hours of Monday looking harassed and tired. naijagists.com

Omar told anxious journalists who besieged him that Labour had decided to continue with the strike, but suspend the street protests and rallies to prevent them from being hijacked by other interests. “Labour has suspended street protests due to the security challenge involved. The strike will continue. Labour has accepted to work with the Alfa Belgore Committee set up by the government to negotiate a new price for petrol within the next three days”, Omar told journalists.

It was the third time the labour leaders will be meeting with the presidential team since the previous Thursday when negotiation brokered by Senate President, David Mark, to end the nationwide strike, rallies and street protests declared by the unions over the New Year day removal of subsidy which resulted in the hike in price of petrol from N65 to N141 per litre began.

The two previous meetings had ended in a deadlock with the labour leaders insisting on reversal of price to N65 per litre before any negotiation for a possible new price for petrol will begin, while the government team insisted that deregulation of the industry cannot be reversed.

Government had instead offered to reduce the price of petrol to N120 per litre so that Labour can call off the strike. The offer was rejected by Labour who insisted on reversal to N65 before any talk of adjustment of price for the product can even be contemplated.

Nevertheless, Labour left the meeting with a promise that it will take the government’s proposal before its National Executive Committee(NEC) and return with a reply to the government’s proposal. The meeting was adjourned till Saturday night. Just before the Saturday meeting, members of NEC of NLC and Trade Union Congress of Nigeria met separately.

They agree that they will insist on reversal to N65 per litre price at the meeting with the President and his team later in the night. With key figures in the presidential team like Finance Minister, Ngozi Okonjo Iweala and the Minister of Labour, Emeka Wogu, urging the President on in his insistence that the petrol price cannot be reversed to the pre-1 January, 2012 level, the Saturday meeting was doomed for failure from the beginning.

Thus, it was no surprise that the meeting ended again in a deadlock. But on Sunday afternoon, a flurry of activities that started with visits to the residence of Senator David Mark by some governors led by the Governor of Rivers State and Chairman of Nigeria Governors Forum, Rotimi Amaechi, will later culminate in the reduction of price of petrol to N97 per litre announced during an early morning broadcast by President Jonathan.

Labour was not consulted in fixing the price and the labour leaders made this clear at the Press Conference during which they announced the suspension of the nationwide strike on Monday afternoon. We, however, gathered that the Labour leaders were confronted with allegations that continuing with the strike and street protests will be tantamount to giving those perceived as “enemy of government” a platform to attack the administration of President Jonathan.

Indeed, the Attorney General of the Federation, Mohammed Adoke, had in a press statement on the third day of the strike, accused some politicians of using the opportunity of the rallies organised as part of the strike to make “treasonable statements”.

Even as Labour was calling off the strike on Monday, the Inspector General of Police, Hafiz Ringim, was addressing the press, threatening to arrest and arraign anybody who calls for “regime change” for treason. Labour itself said it called off the mass action in order to “save lives and in the interest of national survival”.

The President had warned in his Monday morning broadcast that government would “not condone brazen acts of criminality and subversion. As President, I have sworn to uphold the unity, peace and order of the Nigerian State and by the grace of God, I intend to fully and effectively discharge that responsibility.” There is no better way of describing the palpable scare created in government circles by the momentum the strike gathered within the five days it was on than the hurried deployment of soldiers across key cities of Nigeria on Monday morning.

In the end, it was the security scare that was used to get Labour off the streets. (pm news)