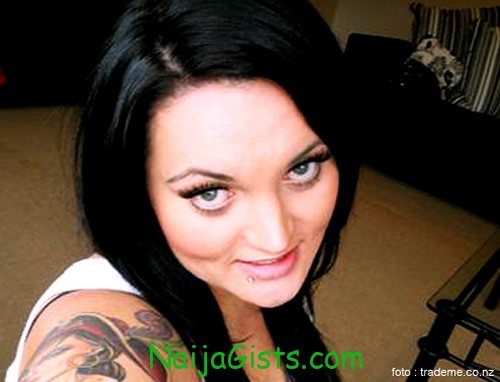 New Zealand Woman, Tina Beznec, is auctioning off a 9×9 cm space on her buttock to be tattooed according to the winner’s choice. www.naijagists. com

Through her profile on trademe.co.nz, Tina says:

You might think I am crazy for doing this! But yes, the winner of the auction gets ANYTHING they like tattooed on my bum!”

She plans to use the money to pay all her bills and visit her mother in Australia. naijagists.com

Thinking ahead, Tina has listed a set of reasons why anyone would care to purchase a bit of tattoo space on her behind. She cites reasons ranging from business promotions to marriage proposals, not to mention plain old boredom.

And she hasn’t been too far off the mark. So far most of the bids she’s received are from businesses and advertising agencies. It isn’t surprising at all to learn that her ‘initiative’ has met with a lot of criticism. But she has people encouraging her as well.

Some of the conditions put up by Tina are that the tattoo will go on only one butt cheek, and that she will get it done at a place of her choice. Of course, if the winner happens to be in the same area, they are welcome to come by and watch her get it done!