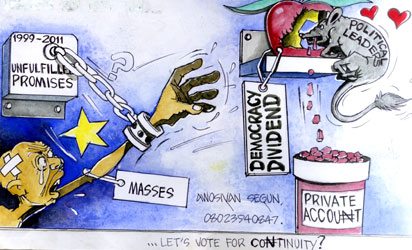 5 of the major oil marketers that have been benefiting from the Federal Government petroleum subsidy scheme have disclosed how they shared N182 billion among themselves under the subsidy scheme within two years. naijagists.com

The major oil marketers made up of Conoil Nigeria Ltd, A. A Rano, ASB Investment Ltd, Forte Oil Nigeria and Knight Bridge Ltd that appeared before the Joint Senate Committee probing petroleum subsidy, yesterday, in Abuja gave detailed accounts of their various claims running into several billions of naira even as they denied malpractices in the subsidy scheme.

Managing Director of Conoil, Mr. Biodun Wahab, in his testimony to the committee said the company joined the subsidy scheme in 2008 and had its first approval from PPPRA to import 12,153 metric tons of petroleum products.

Members of the committee questioned the sudden rise in reimbursement claims, alleging that it must be due to the mismanagement of the subsidy scheme.

But Mr. Biodun, however, clarified that the increment was due to the fluctuation of oil prices in the international market while absolving his company of sharp practices.

He said: “The cost of crude is a function of the fluctuation in the international oil price which you have to manage. When you look at the price of crude today, it is not as the same as 2009 and 2010. There is a document to back this. We do not do any sharp practice, we do not share vessels with anybody, and we take oil to Cotonu for ship-to-ship transfer because of insecurity at the Lagos port.”

Chairman of the Committee, Magnus Abe, lambasted the Chief Executive Officer of Knight Bright Ltd, Mr. Gregory Enaharo, who claimed that his logistics company got approval from PPPRA to import 75,000 metric tons of fuel, with accompany payment of over N3 billion.

Enaharo had earlier told the committee that the company had no tank farm or retail outlet for distribution of petrol products but, however, got the approval due to its experience in importing raw materials for oil companies like Mobil.

Abe while lambasting him said, “You are one of the brief case companies. You have reimbursement of over N3 billion with the logistics turnover of about N100 million. Does this make you a leading logistics company? You have only supplied valves and bolts, but you got three approvals, how did you do it? You do not even have an office, no storage farm, filling stations what do you have?”

Why we are probing now —Senate

Meanwhile, the Senate has explained that it was not prepared to interfere in the work of the House of Representatives, hence it had to soft-pedal and carry out similar  probe of the N1.7tr oil subsidy five days after the lower chamber rounded off its investigation.

This was explained, yesterday, when some oil marketers appeared before the Senate Joint Committee on Petroleum Resources (Downstream), Appropriation and Finance, chaired by Senator Magnus Abe, PDP, Rivers South East to unfold to the committee how much was spent and who collected what from the N1.7tr oil subsidy.

According to Abe, “this investigation was on-going before the House of Representatives started its own, we decided not to interfere to allow the House to wind down. The Committee will conclude this investigation in accordance with our mandate. It is, therefore, not appropriate for us to comment on the issue. What the National Assembly is concerned about is the people, we have the interest of the people; whatever will arise will be settled by the leadership of the National Assembly.”

Some of the oil companies that appeared before the Committee frowned at the way and manner the PPPRA allocates quantities of petroleum products imported by oil companies, just as they called for  improvement in the allocation of quantity of oil to be imported, adding that presently some of them were importing below the capacity they would have otherwise desired.

Particularly, Managing Director of Conoil Nigeria Plc, Abiodun Wahab, told the committee that if Nigeria, as a country, must address the present problem that called for the probe, adding that there was the need for a proper re-certification of the industry by the PPPRA, just as he said the way and manner allocations were handled last year was beyond expression.

He, however, advised that the rules must be adhered to for those who do not have any business to be in the industry to find other businesses to engage in, rather than destroy the sector.

Wahab who raised some concern over insecurity on the nation high seas, explained to the committee that his company had allied for as much as I60,000 metric tons but had not been able to get that quantity.

Adding that some of the oil firms had to take their vessels to neighbouring countries such as Republic of Benin and Togo because of inadequate storage facilities at the nation’s ports.

According to him, ‘’We are very clean and we do not engage in any over payment. As a company, we don’t share products but the facilities that we have at the port can not take the products that we bring in. We need to split the products but there is a security risk because of the way pirates operate. We have to move to the next port which is near to us in the neighbouring countries. It is because of the difficulties in the jetties.”

Speaking further yesterday, Senator Abe, the profiles to be submitted today must contain the memoranda of Understanding, MoU signed by the companies with the PPPRA, record of sales transactions, among others to enable the Committee ascertain who was involved, the level of involvement as well the place of origin of the cargo.

‘’All the companies that participated in this subsidy must submit their profile to this committee to contain MoU in the next forty-eight hours to then focus on issues that will come up, ‘’Abe said.

10 children drowned as rainstorm wreaks havoc in Lagos
5 Things To Never Say To Someone You Love, Even on Valentine’s Day