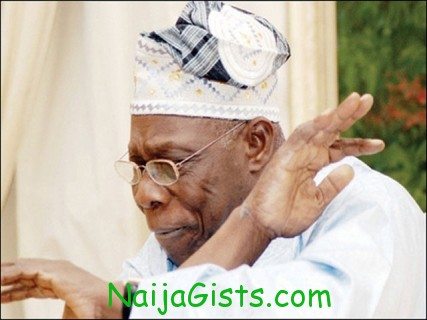 March 4, 2012 – “I can’t remember anything negative,” About Obasanjo – Sunday Njokede

Excluding ex-president Obasanjo from wrongful behaviour is the cheapest and lowest rank of image-making and praise-singing ever. President Jonathan Goodluck had told a Swedish journalist: “I can’t remember anything negative,” about former president Olusegun Obasanjo. Wonders, they say, shall never end. naijagists.com

As I write now. The German police had on this Friday, searched the house of Christian Wulff. The German president Mr Wulff had resigned few weeks ago owing to conflict of interest. His crime is this. During his days as governor of Niedersachsen/Hannover a friend of his paid a holiday trip for him. This, and much more scandals are the reasons he resigned his presidency.

Major amongst his indictments is that he borrowed five hundred thousand Euros from one of his friends. The credit has a very low interest rate payback package. Germans couldn’t understand why ordinary people and working class would borrow conventionally from banks and pay higher interest rates whilst their president grabs a cheap loan. They are unanimous for the president to lose his immunity and thereafter face the law. And, the law he must face. Germany isn’t Nigeria where sacred cows and untouchables knockabout as if this world belong to them.

Now back to Nigeria. Mr Jonathan’s romantic hailing of OBJ is one thing and reality is another. Personally, I can remember plenty negative things about OBJ. For example, bribing of senators for his failed third term tenure elongation; spending sixteen billion dollars in eight years on electricity with more darkness to show for it. His sins are legendary well-catalogued for the history books.

True. One has to be deaf, dumb and blind not to know how dirty OBJ is. To pour unmerited accolade upon a man most Nigerians take as Frankenstein evil makes my skin crawl. Former president OBJ is corrupt from root to branch and living from hand to mouth morally. What is worse than sleeping with your son’s wife as an African? All things being equal, the former president should have personally gone out of circulation like fake counterfeited money. In the olden days, he would’ve been ex-communicated and chucked into the Evil Forest for the rest of his life.

To underwrite OBJ’s dubiousness and whitewash him with socio-centric goodness is a solid attempt at lowlife by the president.

And again, if President Jonathan was alive in 1998 – he’d have known that Obasanjo had twenty thousand Naira only. In 1999 he took over the presidency. Eight years thereafter. OBJ became a mysterious moneybag without any hard hustle. The former president is now living fly like the torch musician R. Kelly. Every day, fiesta!! fiesta!! How did OBJ make this grandiose leap from a somewhat poor kobo pincher to millionaire?

Therefore, I put this question directly to President Jonathan and the EFCC ace Lamorde. How did OBJ do this for modesty sake?And furthermore, what in this world is the difference between former president Obasanjo and onetime ex-governor Sylva of Bayelsa State that, one is a saint and the other, a sinner? In Naira and kobo, both men have the same stamp, and are cut out from the same contaminated cloth. Except that OBJ has more drag bogging him down than Sylva.

If you are looking for a decent man or Mr Right, former president Obasanjo is the wrong address to search. But nonetheless, President Jonathan tete-a-tete, told the Swedish journalist recently that. Mr Obasanjo is the real McCoy. Something is not sitting right with a country where its president sanctifies people with dirty characters at private whims.

In President Jonathan’s worldview, a kettle can be blacker than a pot. There is no problem.  So long as Sapele water is Sapele water. Sylva and OBJ can be morally and socially bankrupt. Wherefore one can be adjudged Godhead and the other Luciferian, depending how it soothed Jonathan’s personal mood swing.

But Nigerians aren’t finding it funny that Sylva is being investigated by EFFC just at the same time Mr Jonathan has exonerated OBJ from morally and criminal wrongs.

In retrospect, during the OBJ’s era, he had cleared IBB of all criminality in the same manner. The outcome of such clearance was that Ribadu developed a phobia not to investigate Babagida even though he had counterview to his boss’s opinion.

And his time: Lamorde’s EFCC would take Jonathan’s exoneration of Obasanjo as law by itself. Sundry security operatives and Judiciary would take cue from the EFCC and ape along. Bottom line is this. Our security people would be enfeebled and more so continue to look the other way not minding whether OBJ commits heinously despicable crime upon man or country.  The, I see no evil and hear no evil effect would come to play in Nigeria. In this era wherefore OBJ and co. have been given the license to kill and do as they choose at whim of presidential fait.

Ex-governor Sylva of Bayelsa State and those others who President Jonathan doesn’t like can contend with the EFCC on a cat and rat basis. Not that any corrupt politician like OBJ and Sylva would go to prison as long as Jonathan is there. Applying the EFCC on his foes is just scare tactics to put fear into them so that Jonathan can have his way temporary. This idea of sacred cows and untouchable for some and not others, is injurious to man and a threat to democracy.

Herewith are some more backings Jonathan gave to Obasanjo during the interview and he said thus: “In every government all over the world the opposition parties want to take over. For them to do so, they must challenge your credibility. If you talk about elections we had controversial elections before Obasanjo. It wasn’t only in his time. This time round, we changed the psyche of Nigerians and said: ‘Look, your vote must count.”

Jonathan had just explained in the above quotation that, election rigging didn’t start with OBJ. And in addition, his opinion could be taken to mean that. Election rigging is not too bad after all, as long as OBJ committed it. It’s also worthy of note to include this. Jonathan meant that those who accused OBJ of election rigging are only trying to malign his un-negative credibility.

The said interview between President Jonathan and the Swedish Journalist was reported by the Leadership Newspaper of 22.02.12.  The pressman’s name is Jonathan Power. rig2015@electionyoudie@rocketmail.com

How A Total Stranger Delivered A Baby In My Toilet
Nigerian student, 21 charged with murder in the US