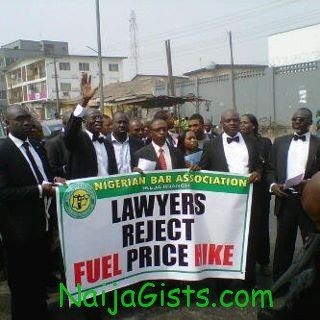 The Nigerian Bar Association (NBA) has advised the National Assembly to begin impeachment moves against President Goodluck Jonathan, if he fails to return petrol subsidy.naijagists.com

The umbrella body of lawyers also ordered its members to embark on nationwide strike from Monday.
This is in line with the mother of all strikes declared by the Nigeria Labour Congress (NLC) to protest the removal of petrol subsidy by the Federal Government.

In a statement yesterday in Kaduna by its President, Mr. Joseph Daudu (SAN), NBA said the “much-touted palliative” measures reeled out by the government will “destroy what is left of the lives of Nigerians”.

The association regretted that “government took advantage of its people’s distress arising from the Christmas bombings and killings by the Boko Haram terrorists and insensitively caused the Petroleum Products Pricing Regulatory Agency (a creature of statute) to announce the withdrawal of petroleum subsidy”.

“If government should apply half the vigour with which it has pursued the issue of the removal of subsidy to the eradication of corruption in all the arms of government and in society in general, then trillions of naira would be freed up for developmental projects”, it said.

In the statement, entitled “Holding Government Accountable and Responsive to the People”, the NBA said the Justice Belgore Committee raised by government to negotiate with the labour and the civil society organisations is a waste of time “because there is in reality nothing to negotiate”.

“The minimum position is the immediate reversal of this provocative and uncalled for increment of petrol”, it stated.

The association recalled how it cautioned government against the subsidy removal and advised it to adopt a different strategy.

The statement reads: “The impression given by government was that the issue will be debated and the views of Nigerians properly considered. Government led its people to believe that the earliest time any possible action would be taken in the direction of subsidy removal was the  April 1,  2012. Instead, government took advantage of its people’s distress arising from the Xmas bombings and killings by the Boko Haram terrorists and insensitively caused the Petroleum Products Pricing Regulatory Agency (a creature of statute) to announce the withdrawal of petroleum subsidy, thereby escalating the price of PMS from the already suffocating N65 to the unbearable range of N141-N250.

“Nigerians have in the past four  days reacted angrily to government’s action described above. It is considered not only premature, but wicked and insensitive. Nigerians have now concluded that their leaders are truly detached from the reality of economic hardship endured by Nigerians. This is so because virtually all high government officials and their families feed and live off tax payers’ funds, yet they enjoy outrageous salaries and other emoluments. In some cases the amount budgeted for feeding and catering is as much as N1 billion. Government officials travel limitlessly round the world for the flimsiest of reasons collecting estacodes in billions even where the object of most of these journeys can be achieved by simply browsing the Internet. Consequently Nigerians have reacted spontaneously to this unwise and ill-motivated manoeuvre by demonstrations and other forms of protest nationwide.

“Government clearly does not understand the seriousness of the situation. It has failed to understand that all governments, be they dictatorial or otherwise, enjoy power because the people allow it to remain in power. No government can outlast the will of the people. It is clear that Nigerians do not and will not tolerate subsidy removal under the terms and conditions set out or laid down by government. Any removal of subsidy based on the importation of petroleum products is unacceptable to Nigerians. Government must create the infrastructure for the refining of 100 per cent of petroleum products in Nigeria and by Nigerians. It had been done in the past, it was sabotaged, and it can and will be done again.

“The response of government has been to say that there is no alternative to the removal of subsidy; with all due respect there are many alternatives.

•If government should apply half the vigour with which it has pursued the issue of the removal of subsidy to the eradication of corruption in all the arms of government and in society in general, then trillions of naira would be freed up for developmental projects.

•Government should identify areas of wastage in governance, such as the allocation of largesse and booties in the name of allowances and withdraw same forthwith.
•Government must embark on a re-orientation of its own values and ethics and those of Nigerians.

•Law and order must be enforced in accordance with the Rule of law.

•And many other urgent and indeed numerous measures.

•Where and if government persists on this suicidal course of action, the options open to the people are limited but clear.
They include: “ A call on the National Assembly to officially and formally declare its position on the removal of fuel subsidy.
“If as we believe the National Assembly sides with the people, then it must in the same transaction call on the President to rescind or reverse its actions on subsidy removal.

“ Should their call not be heeded by the President, then National Assembly should seriously consider impeachment proceedings; the President having lost the confidence of Nigerians to continue to rule or lead them.

“If the legislators fail to take the desired actions then Nigerians will commence the constitutional process to recall them.
“The Nigerian Bar Association believes in the Constitution of the Federal Republic of Nigeria and the Rule of Law. Where its elected officials believe that government and governance have become private property run at the master’s whims and caprices, then the time has come for these officials to be reminded that that the people are in charge.

“It must be mentioned that it appears to be more than a coincidence that government chose to remove subsidy at a time when the nation was reeling and mourning from the activities of anarchists and terrorists. Be it noted that Nigerians will not be cowered either from the activities of terrorists or those of an insensitive government. We shall deal with and resolve these issues with or without Government.“
Daudu said the NBA had since the purported removal of fuel subsidy been in active consultation with the NLC, TUC, NMA and other professional bodies and civil societies.

“For the avoidance of doubt, all members of the NBA shall participate in the nationwide strike commencing on  January 9,  2012.
“The strike shall be comprehensive with all lawyers withdrawing their services from courts and elsewhere except as it is necessary to facilitate the continuation of pressure on government to rescind its actions.”