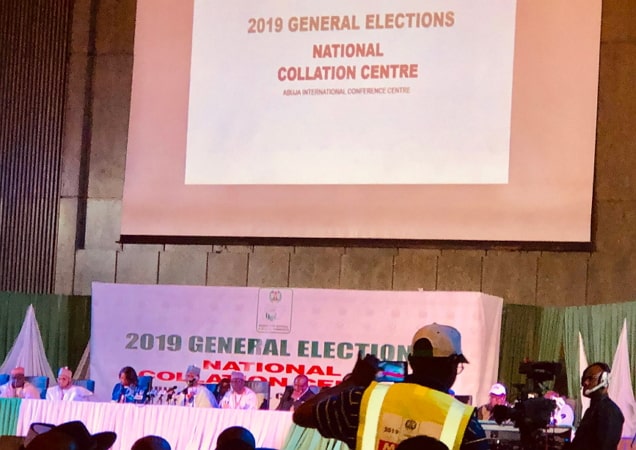 The leading party APC on Sunday described the call by the Peoples Democratic Party (PDP) on the Independent National Electoral Commission (INEC) to declare its presidential candidate Atiku Abubakar as winner of Saturday’s presidential election as an unwarranted attack on democracy and Nigerians.

In a statement by its National Publicity Secretary Lanre Issa-Onilu, the APC said the call was shameful.

“The PDP in that statement, recklessly calls on the INEC to arbitrarily declare its candidate, Atiku Abubakar the winner of the presidential election.

“This call is shameful and alarming; unwilling to wait for INEC, the constituted legal authority to complete its task, the PDP seeks a short cut by false and premature claims of victory, this cannot stand.

“Our nation is trying to perfect its democracy, not turn it into a mockery, sadly, this objective is lost to the PDP.”

The ruling party accused the PDP of trying to intimidate the Independent National Electoral Commission (INEC) to declare its candidate even before the collation of the result begins.

Issa-Onilu said the APC believed in the sanctity of the ballot box and the rule of law, stressing that what the PDP was trying to do was throw the nation into a state of confusion.

He accused the PDP of being desperate to take over power, noting that it was not patient enough to allow the INEC carry out its constitutional responsibility of collating the results as expressed by the people before declaring the winner of the election.

He said the statement by the PDP was not helpful to the electoral system, adding that seeking a short cut to power will be counter-productive.

“Sadly, this objective is lost to the PDP. The PDP’s guiding principle is distilled to the following: because they want something, then they should get it. What they use to guide themselves actually blinds them instead.

“They want the presidency so badly that they have engaged in all manner of misconduct and spared little cost to achieve their aim, they now believe that they are entitled to claim victory, notwithstanding the vote and will of the people. But this is not the way of democracy. Democracy means the people choose for themselves not that the PDP chooses for them.

“That may have been the way in the past when they engineered and kidnapped elections to achieve their desired end, notwithstanding the true will of the people. Thankfully, those days are gone and gone forever.

“These elections are supposed to be democratic exercises, not a platform for the PDP to impose their selfish designs on a hopeful nation. The PDP should honour and follow the sovereign will and sober dignity of the Nigerian people.

“The people patiently waited the additional week for Election Day to come. The vast majority of people again exercised patience as they peacefully voted on Election Day.

“Unfortunately, isolated incidents of violence took place. We are deeply saddened by the violence and disruption that did occur. Nigerians died yesterday (on Saturday) and that should never have happened and should never happen again during an election of any kind in our land. Their deaths are needless tragedies that marred what was otherwise a celebration of our maturing democracy.

“Instead of the discordant and provocative statement it released, the PDP should be appealing for peace and for INEC to diligently and thoroughly perform the vital task assigned it.

“Curiously, the majority of violent incidents and reports of electoral malpractice emanate from states which the PDP controls. It appears the PDP just cannot break from their old ways.

“The PDP press statement is but a continuation of the sordid games that party has mastered. While all evidence points to the misconduct of their people, they make outlandish and false claims against the APC.

“This is but the typical modus operandi of a master swindler. They seek to distract the public eye from their own wrongs, by falsely accusing the APC of the very things they had conspired to set in motion months before this election even took place.

“From trying to falsify results on the ground to attempts at hacking the INEC software, they are willing to say and do anything to obtain victory, no matter how tainted by the wrongs they commit.

“On our part, the APC has governed and campaigned as we believed was right. Because of this, we are content to await the verdict of the people. We also believe that only INEC has the authority to announce election results.

“What the PDP is trying to do, by claiming without any factual basis that Atiku has won, is usurp INEC’s constitutional authority. Moreover, PDP’s words are rash eruptions that may incite needless violence and unrest.

“Thus, we ask the PDP to live up to the status it claims for itself as a large political party. The PDP should behave more responsibly instead of acting the role of spoiled children who threaten to upset the dinner table if not fed their preferred meal. The APC asks and encourages INEC to do its job as mandated by law and by good conscience and not by the screams of those who do not fully believe in these ideals. We hope INEC can begin to release results soon and do so in a way that protects and honours the vote of every Nigerian who cast a ballot.

“We also ask our members and supporters to exercise patience and conduct themselves peacefully. Democracy is a contest of issues and visions. Not one of muscle and fighting. Let there be no more violence among us. Remember that we are all Nigerians and belong to the same national family despite our political differences.

“On this day, may democracy and sovereign will of the electorate reign. There is no worthy substitute for this despite the malign protestations of the PDP. If Nigeria is to stand for something, let it be democracy and let it be today, so that we assure for ourselves fruits of a brighter future.”

Nigerians would have to wait another day to receive official results of the presidential elections as the Independent Electoral Commission (INEC) has adjourned the collation of the results until 11am on Monday, February 25, 2019.