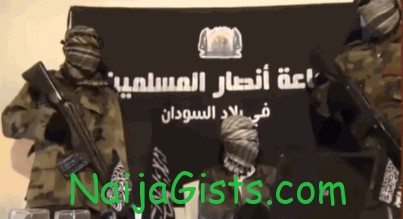 JAMBS, believed to be a breakaway faction of the violent Islamic sect, Boko Haram, said in a statement on Saturday ,that the soldiers were attacked in order to warn Nigeria against joining Western powers in their “aim to demolish the Islamic empire of Mali.”

The soldiers, on their way to Mali as part of African peacekeeping mission, were ambushed by the JAMBS members , who threw Improvised Explosive Devices at their convoy along Okene-Lokoja Road. Two soldiers and many others were said to be injured during a gun battle that ensued.

JAMBS claim came on a day that the Emir of Kano, Alhaji Ado Bayero, was flown abroad for treatment after Saturday’s attack on his convoy. Bayero’s driver and three others died in the attack.

In a terse statement posted by an online publication, Dessert Herald, on Sunday, a person claiming to be the Leader of JAMBS, Abu usamatal Ansary, warned Nigeria and other African to be ready for “ more difficulties” as they embarked on restoring peace to Mali.

The statement reads, “We, members of JAMA’ATU ANSARUL MUSLIMINA FI BILADIS-SUDAN, are gladly informing the general public, especially those in black Africa, that with the aid and guidance of Allah, we on January 19, 2013 at Itape, Ekehi Local Government Area of Kogi State, successfully executed our first attempt in attacking the Nigerian troops that were aiming to demolish the Islamic Empire of Mali.

“We are equipped and waiting for any slightest attempt of Nigerian army moving towards the Islamic Empire of Mali. And we are warning African countries to stop helping Western countries in fighting against Islam and Muslims; if not, we are sternly assuring them, particularly the Nigerian government to be prepared and be utmost ready to face difficulties from JAMBS anywhere and anytime. May Allah help us and grant our wishes.”

When contacted, the Director of Army Public Relations, Maj.- Gen Bola Koleosho, said he had not seen the statement by the group.

He said the terrorists were giving Okenne a bad name which the people must resist.

He said “I have not seen it (the claim by JAMBS). I am just hearing it. We are not issuing any statement now.

“The only thing I see is that it could affect the image of Okenne as a town. Commuters passing through the town are already dreading it. They are giving the town a bad name. And I know that law-abiding people in the town would resist it.”

Mali, a neighbouring West African country, has been in the throes of Islamic insurgency since March 2012 when mutinous soldiers in Bamako overthrew President Amadou Toumani Touré.

The soldiers said they were angry over the government’s alleged mishandling of a rebellion by nomadic Tuareg rebels in the country’s vast northern desert.

Following on the heels of the coup, the Tuareg rebels first seized much of the north and then were themselves pushed out by Islamist extremists.

The Nigerian soldiers are part of the West African intervention troops in the crisis.[Punch]