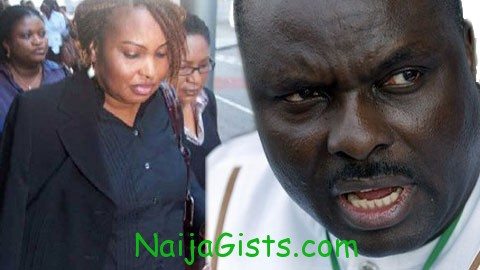 March 4, 2012 – James Ibori Et Al And The Shameless Ones Among Us By Paul Adepoju

The corruption charges brought against him by the EFCC were theft of public funds, abuse of office, and money laundering, among several others. As expected, he pleaded “not guilty” to all count charges.

On December 17, 2009, A Federal High Court sitting in Asaba Delta state, discharged and acquitted Ibori of all 170 charges of corruption brought against him by the Economic and Financial Crimes Commission (EFCC). Not even the publicized $15 million bribe that was allegedly given to the EFCC head by the accused was strong enough to convince the judges that Ibori had case to answer. As far as they were concerned, he has not broken any portion of the Nigerian Constitution.

In April 2010, after the takeover of leadership by Goodluck Jonathan, James Ibori’s case was revisited. Fresh charges were pressed against him. But this time, he couldn’t be reached. A ridiculous hide-and-seek game was played as law enforcement officers looked for him, like a misplaced needle with no thread, in Abuja, Lagos and Oghara – all to no avail. He was supposedly being guarded by armed militia men who staged a gun battle with government officials that came to arrest Ibori. In his defense, he (Ibori) described himself as a victim of political persecution and prosecution.

Mysteriously, the victim of persecution sneaked out of Nigeria and landed in Dubai. Nigerians resorted to fate knowing that it was impossible for Nigerian security operatives that couldn’t arrest him within Nigeria to successfully arrest him in UAE. They were right. But the Calvary – in this case, the INTERPOL, stepped into action that was initiated by London Metropolitan Police. After a series of drama and legal tussles, Ibori was extradited to UK to face trial.

But unlike the Nigerian law suit, the London court said he (Ibori) had serious cases to answer. His female accomplices were sentenced to jail terms. And he also confessed to committing the allegations. However, a new twist was introduced when he said his confession was a sign of patriotism to his fatherland. He said he confessed to save Nigeria from international ridicule.

This clearly shows there is a great misunderstanding of shame, disgrace and ridicule in Nigeria, especially among the corrupt leaders. Before, it used to be a lack of shame but it seems like the real issue is lack of understanding on what disgrace is really about. Lack of an iota of shameful truth has made it impossible for any political office holder on this side of the planet to resign when facing corruption trials, fraudulent allegations and accusations of sexual molestation.

The ridiculous aspect of Nigeria’s shame exodus is that no matter the magnitude of the embarrassment incurred, the corrupt elites in Nigeria always have at least their fellow countrymen (and women) speaking in their favor, even after setting milestones in international corruption, trafficking and money laundering. This we-are-on-your-side-no-matter-what phenomenon was the order of the day when former deputy governor Goodluck Jonathan’s boss jumped bail, dressed as a woman, sneaked into Nigeria and was treated to a heroic welcome by “his people”. Even his political party – the PDP, found nothing wrong in allowing him to be on the podium, holding the microphone and talking to the people of Bayelsa. He wasn’t booed; instead, he got thunderous claps and it looked as if the entire populace – including the opposition, had contracted Alzheimer’s disease or didn’t see anything shameful in what the former governor did.

Ibori’s ordeal looks like a replay of the Bayelsa story told above. But it’s more shameful since he successfully evaded the Nigerian legal system, slipped off EFCC, and was bold enough to seek his party’s presidential ticket. To the best of our knowledge, he even put in a few good words on Mr. President’s campaign train. But what is more ridiculous is the availability of his numerous supporters who give various subtle we-are-behind-you speeches. They transcend beyond age and educational barriers. They include those that had enjoyed the largesse of his administration and those who didn’t, but are proud of his scorecard, or the mere fact that they are from the same ethnic group and autonomous community. There is an online community of those in support of Ibori. They throw tirades and literal bombs at those who openly mock the ex-governor and PDP chieftain.

Even in the current dispensation, James Ibori is not the only one who is lucky to have praise singers on his payroll. As a matter of fact, every serious politician must have people cheering him up, even if he is footing their bills. Mr President is also enjoying their services. The Neighbor2Neighbor organization is a good front and there are lots more. They are set up by fellow Nigerians who are okay with current tides of insecurity, wrong decisions, terrible policies, ill-advised principles, wrong timing, “slow server”, harsh actions, wasteful spending, and pathological cluelessness on highly sensitive issues like national security and economy.

On a broad sense, such “shameless” Nigerians belong to at least one of the following categories: those who are on the payroll of the accused, those who want to be on the fellow’s payroll, those who believe knowing the accused will give them higher social status and those who are so deeply engrossed in charades of illusions and are befuddled with intellectual psychosis that had prevented them from thinking with their heads, but prefer to go with their long throats.

Nigerian legal luminaries can go into long probably wrong speeches to defend the court’s “discharged and acquitted” verdict in Ibori’s case few years ago. But his London confession to the charges he denied here is a shame on Nigeria’s judiciary system. It shows that the arms of law are shorter and weaker here. If possible, those seeking real justice might need to pursue the review of the constitution to allow cases to go beyond the Supreme Court and reach London Courts since the Nigerian judiciary has a lot of in-house cleaning to do with Justice Salami’s case still fresh in the news.

Furthermore, the sane population needs to sort out the shameless demography. It’s an intellectually sapping futile effort any attempt to understand them. Or how can one explain the thousands of people that rolled out the drums to welcome ‘Alams’ back to the country after jumping bail and dressing like a woman wearing a limited edition Victoria Secret’s lipstick; the multitude that wore Bode George’s out-of-prison ankara dresses, the party that made a paedophile its senatorial flag bearer; or Nigerians who still believe GEJ is on the right track despite his numerous wrong actions, aborted promises, harsh policies, insecurity, expensive afterthoughts, evaporated palliative measures, ridiculous food bill, “slow server”, acute cluelessness and pictures that make his foreign trips look like the ones taken by students on excursion?

To the best of my knowledge, Nigeria is simply a strange nation filled with strangely shameless politicians. (info@adepojupaul.com)