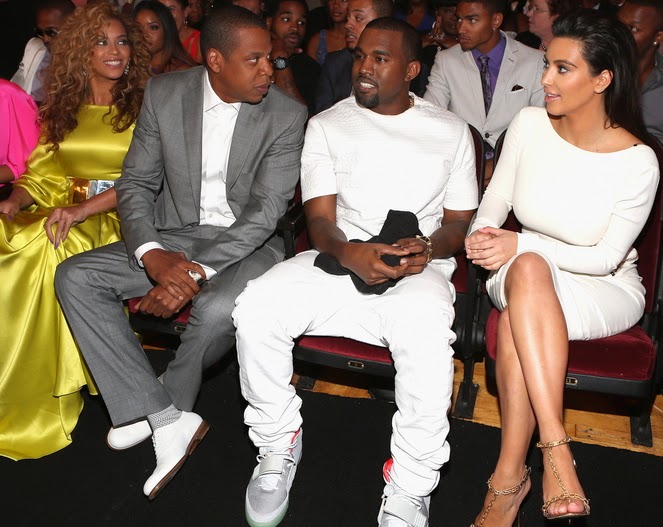 July 6, 2014 – Jay Z To Kanye West: Your Marriage To Kim Kardashian Will Ruin Your Career

According to OK Magazine sources, Jay Z and his wife Beyonce have cut off all ties to Kim K and her husband rapper Kanye West.

The source alleged that Bey and Jay feel friendship with Kimye is bad for their professional image.

This is how OK Magazine is reporting it;

An insider tells OK! that Jay Z and Beyonce have ceased all contact with pal Kanye West and his bride Kim Kardashian, who had spent the last two years pushing to get closer to the stars.

“When the rappers were on tour, Beyonce was forced to sit with Kim at shows and hang with her after, and she put up with it through gritted teeth,” says the source.

Now the newlyweds have even been spending more time at their New York apartment, just two blocks away from Jay and Beyonce’s home there, in a bid to get North to Bond with Blue Ivy. However, the insider says the superstars are fed up with being associated with the Kardashian brand.

“Bey and Jay feel like they’ve been dragged through the mud with all the drama surrounding their absence at the Kimye wedding,” says the source, adding that Jay has actually been moving away from his former BFF for some time. “Jay made it clear to Kanye that he doesn’t approve of the choices he’s making in his personal life and it will end in disaster for his career.”