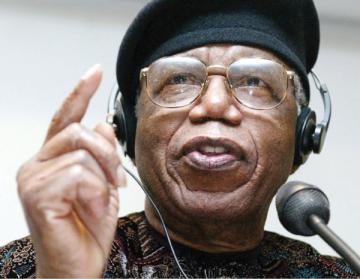 Negative reations have continued to trail President Goodluck Jonathan’s award rejection decision by popular writer and novelist, Prof. Chinua Achebe conferred on him by the administration.

Chinua Achebe had in rejecting the honour of the Commander of the Federal Republic conferred on him declared that the issues which made him to reject the same award seven years ago still remain unresolved.

In a reply to the Achebe, Jonathan’s media aide, Reuben Abati, said the reasons given by Achebe fly in the face of the reality on Nigeria’s current political situation.

“Politically, Nigeria cannot be said to be where it was in 2004 as the Jonathan Administration has embarked on extensive electoral reforms to institute a regime of electoral integrity that all Nigerians can be proud of, believing that governance will be greatly enhanced in the country if the will of the people prevails at elections,” Abati stated.

Reacting to the attack on Achebe, Tokunbo Mumuni, Executive Director, Social Economic Right Agenda said, “it is really laughable that government will say that just because someone is not living in Nigeria, then he or she is ignorant of events in the country. The world is now a global village, so, everybody knows that things are not right in Nigeria.

“Achebe has a right to reject any award he feels is not right for him. He did it before during ex-President Obasanjo’s administration and if he feels that the conditions that made him reject the award then are still prevailent, then government should let the man be.

“Personally I think government should concentrate on meaningful things instead of giving awards to people that do not deserve them.”

In his own comment, human rights activist and lawyer, Bamidele Aturu said no serious minded Nigerian should be receiving any award from the government now.

“Nothing is happening in the country. No development; security is down, the roads are bad and social amenities are in the worst state, so, I see no reason why anyone should be receiving any award whatsoever now.

“Achebe should not be crucified for turning down that award because that is what any reasonable Nigerian should do.  I am surprised that instead of the federal government to keep silent about the incident, they now brand him an ignorant person. That is condemnable. Everyone living at home and abroad knows exactly what the Nigerian situation is, so, government should stop deceiving themselves by calling Achebe names.

“In as much as we want the government to succeed, someone should tell them the truth. Nothing is working and Nigerians know that. Let government focus on meaningful developmental projects instead of rewarding their cronies with undeserved awards.”

Professor Onookone Okome of the University of Alberta, Canada, opined: “I think Achebe is within his civic bound if he thinks that the prize comes with what he does not like.”

Speaking on whether Achebe has lost contact with the reality at home, Okome submitted: “That’s another thing all together but it is within his responsibility to say, ‘I don’t want this honour, I won’t take it.’

“What he (Achebe) has complained of is very correct. But there is a possibility of him accepting this honour as a way of gingering the federal government to work harder.”

Prolific writer and poet, Odia Ofeimum reacted thus: “He (Achebe) is generally responding to the climate. He does not agree with the way things are going but what is important is just that non-agreement rather than the specific reason for which he did not agree.

“It means we are all being advised to take a second look at the way the system is going. The specific reason that Chinua Achebe gave may lead to further disagreement because we may not agree with all his reasons.

“Somebody like Achebe is merely calling our attention to the issue we need to take on board. If he does not know we are taking these issues on board, it means we have not shown it enough.

“A man with a voice as loud as Achebe ought to be listened to when he speaks, even if he is not always right,” Ofeimum said.

The ceremony kicked off around 10.45 a.m. with the arrival of the President.

Those conferred with the awards were recipients for 2010 and 2011 as the ceremony could not hold last year because of the preparations for the 2011 elections.

Anyim Pius Anyim, Secretary to the Government of the Federation, however, shockingly revealed that some of the awardees may not get their medals immediately.

According to him, this is because of shortage of medals. He, however, said those who did not get their medals today will get it in a week’s time. Also speaking before the the President began to confer the awards, Justice Belgore, former chief justice of Nigeria and chairman of National Award Committee, said a total of 3,924 Nigerians have been conferred with different categories of the award since it began in 1963.

Billionaire businessman, Alhaji Aliko Dangote, received the highest award of Grand Commander of the Order of the Niger (GCON), thus becoming the first person outside government to receive the nation’s second highest national honour. He was honoured for his contribution to Nigeria’s economic development and philantropy.

The second person conferred with the honour is Aminu Tambuwal, Speaker, House of Representatives, with the award of Commander of the Federal Republic (CFR). Also conferred with CFR is Ita Ekpeyong, the Director General of State Security Service and Mohammed Bello Adoke, Minister of Justice and Attorney General of the Federation.

Those also honoured include the three service chiefs and Hafiz Ringim, the Inspector General of Police.

Other awardees at the event still going on as at the time of filing in this report include Akwa Ibom State governor, Godswill Akpabio; some serving ministers including Olusegun Aganga, Emeka Wogu, Godsday Orubebe, Diezani Alison-Madueke and Dr. Shamsudeen Usman, who are to be honoured with Commander of the Order of Niger (CON).

Former CEO of Zenith Bank, Jim Ovia and another banker, Atedo Peterside, will also be honoured.

Others include Joseph Yobo, Mariam Usman and Peter Konyegwachi, who will receive Member of the Order of the Niger (MON) award.

In the entertainment industry, those to be conferred with the award include Genevieve Nnaji, Stephanie Okereke, Olu Jacobs, Kanayo O. Kanayo and Osita Iheme. Each of them will receive the Member of the Federal Republic (MFR) award, while Nigeria’s first female vice chancellor, Professor Grace Alele-Williams, will be honoured with the Officer of the Federal Republic (OFR), alongside a number of state chief justices, including erstwhile Deputy Speaker of the House of Representatives, Mr. Babangida Nguroje.(pm news)