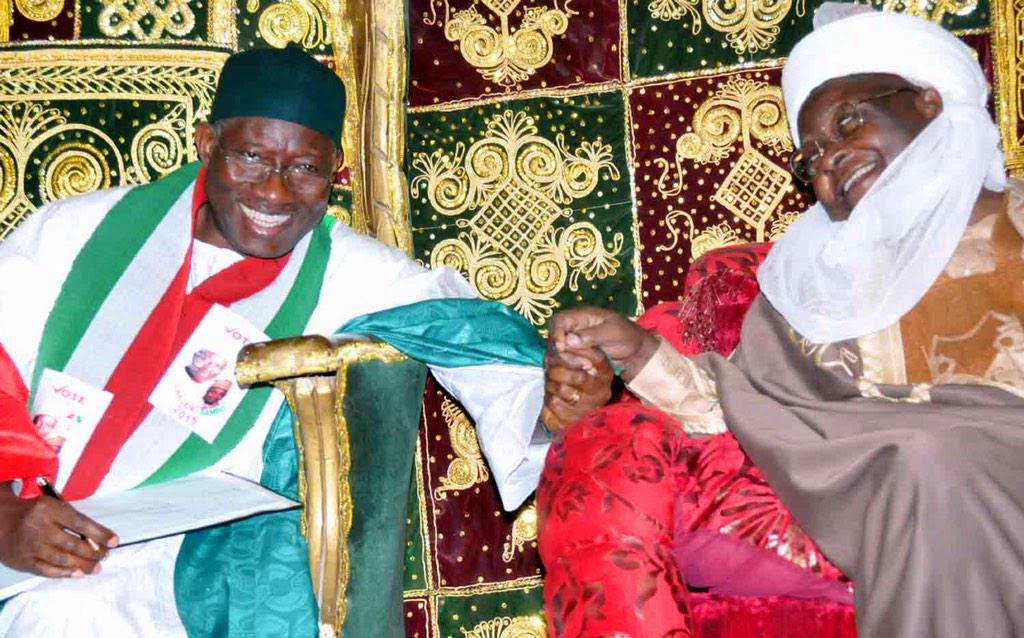 GEJ has been paying secret visits to the North’s leaders, Emirs and groups ahead of Saturday’s election.

President Goodluck Jonathan’s biggest challenger, Gen. Muhammadu Buhari of the All Progressives Congress (APC), is from the North.

The President and his Peoples Democratic Party (PDP) are worried about their prospects in Kaduna, Katsina, Sokoto, Adamawa, Kebbi, Niger, Bauchi, Kano, Borno, Yobe, Kwara, Zamfara and others.

This, said a source, is why the President has turned to the Southwest as the “real battleground”.

Jonathan has visited more than 50 key leaders in the North, urging them for support to sway votes in his favour.

A top source said: “Apart from the few visits captured by the media, the President has in the last six weeks met with more than 50 key Northern leaders, Emirs and groups to come to his rescue. His message has been reassuring that he will not disappoint the North.

“Jonathan made most of the trips nocturnal to protect the image of the leaders and Emirs, who are described as match-makers in the region.

“He believes these leaders and Emirs can turn the table against Gen. Muhammadu Buhari,” the source said, adding:

“It has, however, not been easy penetrating the North because of the perceived marginalisation of the region by his administration.

“It has reached a frustrating level that in some states, the President and the PDP are only striving at securing at least 25 per cent of the votes.

“The President panics because while he is sure of above 80 per cent of the votes in 11 states in the South-South and South-East, the North has been a hard nut to crack. Only Taraba, Plateau, Benue, Kogi and Gombe have given some ray of hope.

“As I am talking to you, there is a fresh plan for the President to visit Adamawa State for the third time to meet with some PDP stalwarts who defected to the Peoples Democratic Movement (PDM) and the Social Democratic Party (SDP).

“The President wants to prevail on these defectors to dump their ambitions and return to the PDP to ensure the victory of the ruling party.”

Vice President Namadi Sambo is said to be under pressure to deliver the region.

The problem, said the source, is compounded by the fact that most of the ministers from the North have not been embarking on direct campaigns for votes because of the likely backlash.

“None of the ministers has been outstanding in mounting the soap box for Jonathan because the North is volatile. Instead, the ministers only appeared at the presidential campaign and zonal rallies before receding into the background,” he said.