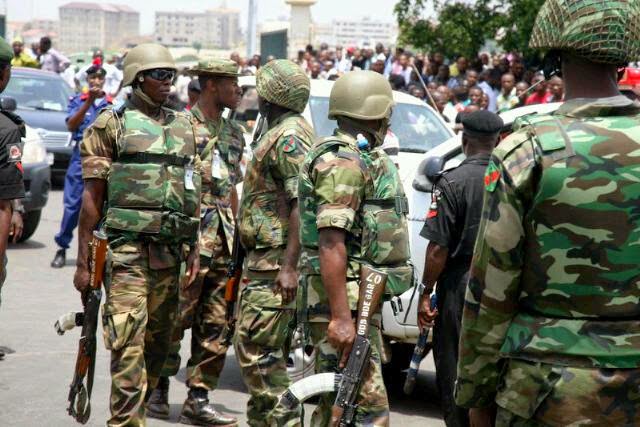 GEJ have ordered the deployment of soldiers in some states – in defiance of court verdicts that the military has no role in elections.

There was panic in Kwara State at the weekend as residents saw troops in the streets.

The military said troops were being deployed to maintain the peace before, during and after Saturday’s elections.

The spokesman of the Army’s 22 Armoured Brigade, Sobi, Lt. Weri Finikumor, said 300 troops were deployed in Ilorin and the other local government areas.

Lt.Finikumor added that the soldiers would maintain security and not meddle in the conduct of the presidential election.

He added that the soldiers would stand 300 meters away from the polling booths and would not be involved in anything pertaining to electoral materials, including ballot papers and boxes.

Lt. Finikumor said the police would provide security around the polling units, adding that soldiers would intervene on invitation of the police if there is a major security threat which the police cannot handle.

The military’s role in the polls has been controversial. While the military high command said the president, who is the Commander-in-Chief could deploy troops, the opposition parties have warned against the deployment of troops for the polls, fearing they could be used to intimidate voters and supporters of the opposition.

Besides, the Court of appeal has declared that the military should have no role in elections. The Independent National Electoral Commission (INEC) has also said soldiers will not be used for elections — except in an emergency.

Ahmed urged Kwarans not to panic.

The governor, in a special announcement, said soldiers were deployed in the 16 local government areas to maintain law and order during the elections.

The statement reads: “My good people of Kwara State. For many years, we have lived in harmony, regardless of our differences.

“Our people are friendly and peaceful. And so, as we prepare to vote for leaders of our choice in the forthcoming elections, I urge you to remain calm and law abiding.

”The army and other security agencies have been deployed in all the 16 local governments to keep the peace and protect you. Your safety is guaranteed. Perform your civic duties without fear. All you need to do is cast your vote, wait for the counting and return home.

“We are a peaceful people and we will remain peaceful long after the elections have come and gone. Kwara State: It’s good here.”

In Edo State, there was a parade across major streets in the South Senatorial District, termed “Show of Force” by security agencies –Army, Police, Department of State Security(DSS), National Security and Civil Defence Corps, Federal Road Safety Corps, Nigerian Prison Services and others.

The parade took off from Ring Road to Ekenwan and then proceeded to Ugbowo. Okada, Iguobazuwa, Siluko Road, Textile Mill Junction and New Benin, before moving on to Benin Agbor Road to Abudu axis.

Spokesman of the army’s 4 Brigade, Captain Abubakar Abdullahi, said the exercise was to demonstrate the unity among the security agencies towards ensuring a violence-free election. He encouraged the populace to feel free and safe to go about exercising their constitutional rights of voting and being voted for without harassment.

Captain Abdullahi said: “What is going on today is a show of force, a way of demonstrating our preparedness for a free and fair, peaceful, credible elections coming up. It’s meant to show the level of unity existing among all the security agencies in Edo State and how we will work together to ensure we have violence-free elections.”

“The patrol will take the whole day, and will cover the entire southern part of Edo State.”

The Commanding Officer, 222 Battalion, Lt.-Col. Mathew Oyekola, who gave this assurance during the show of force, told the combined force of Army, Vigilance group, FRSC and other security agents that the exercise was meant to give confidence to the public that security agencies under the overall umbrella of the Armed Forces are capable of protecting them during the elections.

Lt.-Col. Oyekola said the need for the show of force became necessary to give the electorate reassurance that the forces were prepared and ready to protect them as they came out to cast their vote during the elections.

Warning against violence during the polls, Oyekola said they were not unaware of the violence- prone areas where politicians perpetrate malpractices, assuring them of bringing to book any person caught violating the law during the elections.

He said the drive around more than 10 local government areas that the command covers was carried out to sensitise the populace that the force will not be ready to take for granted any misconduct.

”We will do our best to protect all voters and we will not ignore any phone calls where our attention will be needed for immediate action. All areas where they are perpetrating that act of carrying ballot boxes, we will ensure that there is relative peace and no snatching of ballot boxes or creating violence,” he said.