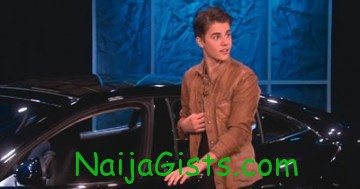 Popular Hollywood celeb, Justin Bieber has just been given an electric car for his 18th birthday. naijagists.com

The ‘Baby’ hit maker, who reached the milestone age today, was presented with a luxury 2012 Fisker Karma vehicle with a solar-panelled roof by his manager Scooter while appearing on ‘The Ellen DeGeneres Show’.

The $100,000 Fisker Karma has a 2 litre – 4 hybrid engine and more than competes with typical gas guzzling sports cars as it can go from 0-60 miles per hour in under 6 seconds with a top speed of 125 miles per hour.

Additionally, Justin owns a Batman-themed customised Cadillac and a Ferrari.