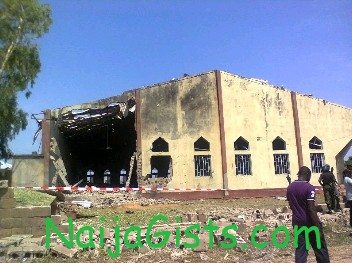 Palpable tension immediately gripped the entire Kaduna State yesterday as the news of a suicide bomber ramming into Saint Rita’s Catholic Church in Ungwan Yero, Malali area of the metropolis spread like wildfire. Residents in the metropolis scampered back home from churches and business places for fear of reprisal attack. Rumour of curfew being imposed on the state also spread like harmattan fire. “I saw dead bodies litter the church premises,” a victim of the bomb blast stated yesterday.

The victim, Veronica Johnson said, “We were in the church, and it was during the consecration when everybody was kneeling down and praying, and all of a sudden we heard the deafening sound of the bomb blast. When I looked back, I saw a car, a jeep that forced itself through the wall of the church fence from behind into the church premises. The bomb blast occured near where the choristers were sitting. So many people died, and so many people injured. I saw some people lying down dead within the church premises. “All my four children were in the church when the thing happened, but my husband was not in the church.

They all sustained injuries. One is just four months old; I am 30 years old from Benue State.” Another survivor, Vista Oko said, “we just heard the loud sound of the bomb blast when we were preparing to take Holy Communion. But before I knew what was happening, I found myself on the ground. I can say that so many people died because it affected the side where the choir members were sitting. The service today was about faith and healing. The Priest preached about God’s possibility, he said with faith everything is possible.

He gave us the story of King Solomon, how God healed him. He said whatever we do, we should hold unto our faith, and that everything will be alright. So the mass was ok. He was about giving communion when the blast happened.” The bomber, according to eyewitness account, drove a Honda CRV Sport Utility Vehicle (SUV) laden with explosives into the church vicinity on full speed, and crashed into the fence of the church, found his way into the church premises and exploded. The bomb blast, eyewitness added, happened at about 8.30 am when the worshippers were about to take the Holy Communion, leaving over 62 people injured, and about 15 killed, including 2 in a reprisal attack that took place within the affected community.

The statement said that 81 injured persons were receiving treatment at Barau Dikko Specialist Hospital, while 35 others were being treated at 44 Military Hospital. It said that 15 injured persons were also receiving treatment at St. Gerrad’s Hospital with five among them were under critical condition. The State Commissioner of Police, Olufemi Adenaike who visited the scene of the incident appealed for calm, assuring that his men were on top of the situation to ensure peace in the state.

Archbishop of Kaduna Catholic Diocese, Bishop Mathew Man’oso Ndagoso appealed to Christian Youths, particularly the catholic to desist from reprisal attack. Ndagoso who spoke with newsmen shortly after he visited the injured persons at Saint Gerald Catholic hospital, expressed surprise over the attack of the church while Muslims were still in the Eid-el-Kabir celebration mood. The State Governor, Patrick Ibrahim Yakowa condemned the attack and appealed for calm among the citizens of the state.

Yakowa who spoke through his media spokesperson, Reuben Buhari, also warned people to desist from reprisal attack, but pray for the unity and peace in the state. He urged the youths not to take laws into their hands, while describing the bombing as, “inhuman and barbaric.” The eyewitness, Ishaku James said, “There are so many injured people who have been taken to hospitals like Garkuwa hospital, Saint Gerald Catholic hospital, Army 44 Reference hospital, Barau Dikko Specialist hospital.

“We are still looking for the Reverend Father Bonni Bazah. He sustained serious injuries on the face, but we don’t know which hospital he has been taken to, we cannot say for now whether he survives the attack or not. We don’t know where he is now, but initially we took him to Garkuwa General hospital. “The Priest was saying it is well, it is well, it is well while his face was covered with blood. “The suicide bomber used Honda CRV. The church is called Saint Rita’s Catholic Church, Ungwan Yero, Malali.

The bomb blast happened at about 8.30 am when the parish priest was blessing the sacrament. “Even if there were security men, they couldn’t have stopped the bomber because he came driving with force and crashed through the fence of the church, and not through the gate of the church. The car used by the bomber got burnt, and the body of the bomber was dangling against the wall of the church.

“So many people died in the church as the bomber crashed through the wall of the church and hit the area where choristers were staying. It means that many of them must have been badly affected.(Source: Daily Sun)