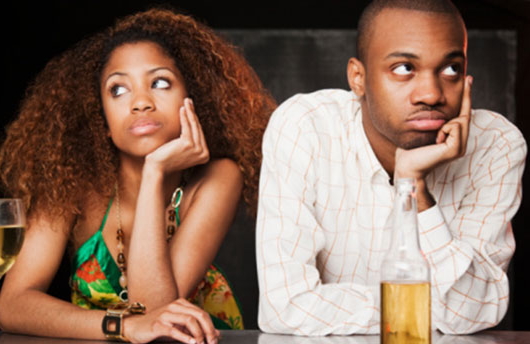 September 10, 2016 – Ladies Beware Of Long Courtship, It Makes You Vulnerable To Heart Break

Chima and Nmasichi met during their youth service seven years ago. They became lovers and virtually inseparable. They rented an apartment where they lived together all through their service year.

She got pregnant twice but had to abort the babies since they were not ready to start a family yet. Chima promised to marry her once they finished serving and get a good job.

After their NYSC, she got a job before him and supported him for over a year from her salary as an account officer in a small firm. Finally, he was able to secure a job as a computer analyst in an oil firm.

She was ecstatic about the news and believed that very soon, she and Chima will get married. Unfortunately, that dream was short lived as Chima’s father was diagnosed of hypertension and diabetes. He suffered a stroke and had to be constantly hospitalsied and monitored to stabilise him.

This of course took a heavy toll on Chima’s finances as the first son. He was also saddled with the responsibility of seeing his two younger brothers through the University since their father was no longer in any condition to cater for the family.

That was how Nmasichi waited endlessly and patiently for six years for Chima to settle all his numerous family problems so they could settle down as husband and wife. Eventually, his two brothers graduated from the University and his father’s condition stabilised to the extent he could be managed at home with the necessary apparatus needed to monitor his blood pressure and sugar level.

So, it was only ideal for her to ask Chima to set the date for their wedding; but he kept giving her lame excuses of work pressure and the need to save good money before finally settling down. Recently, she also discovered that he became somewhat distant. He hardly comes to visit her since he moved out from her little room and rented a bigger apartment where he claimed they will soon start their family together.

You can then imagine the rude shock she received when she opened the anonymous letter that was left on her door step last night. Someone apparently wanted her to know about the cruel injustice meted on her by the man she has wasted the years of her youth waiting for. He’s getting married to someone else and everybody knows about it except her.

Now, she’s very angry, desperate and terribly confused. She feels as if someone practically ripped her heart from the rib cage. She’s torn in shreds and wants to take out her revenge on Chima in whatever way she can. No one will make a fool out of her for this long and think they can get away with it.

She must get her own pound of flesh from Chima, Nmasichi vowed to herself. A very sad story of love and betrayal isn’t it? But this is what happens when you get tangled in a long relationship heading nowhere. Ladies, don’t get engaged to man for more than two years please! In fact, a man should not even think of getting married unless he’s sure he can perfect his marriage plans within a space of 18 months.

Women have suffered severally in the hands of the men they fall in love with all in the name of being engaged. Promises are not meant to be broken.

The vows of commitment we make to people we love in the hit of passion may be overlooked, but when you have woken up from the throes of passion and realise you can no longer keep up with the relationship, please let the other person off the hook.

It’s worse if they find out after a long period of time that you never intended to keep your word. The danger behind promise and fail in long time relationship is the bitterness it brews. Nobody likes to be played for a fool.

That is why we keep hearing horror stories of how a woman killed her former boyfriend because he broke the relationship or a man pours acid on his former girlfriend just to make sure no other man looks at her. I am not saying these people are justified in their actions but the truth is that, this could be avoided if the other partner was upfront about his/her feelings.

If you have suffered a broken heart caused by longtime relationship, please allow divine justice to play its cause; don’t take the law into your hands. This is why I don’t advocate anyone to go into long time courtship. Anything can happen within those years to warrant the promise to be broken.

The person may not have done it on purpose, but circumstances usually change the course of life; throwing the couple apart and causing unintentional broken promises and wasted years.

That is why I’ll insist that if you made a promise to your loved one for something as serious as marriage make sure you fulfill it as soon as possible. But, if you are not yet ready, keep your promises to yourself. Don’t make promises you are not yet ready to fulfill if you do not want karma to make an unscheduled visit to your destiny.

8 thoughts on “Ladies Beware Of Long Courtship, It Makes You Vulnerable To Heart Break”