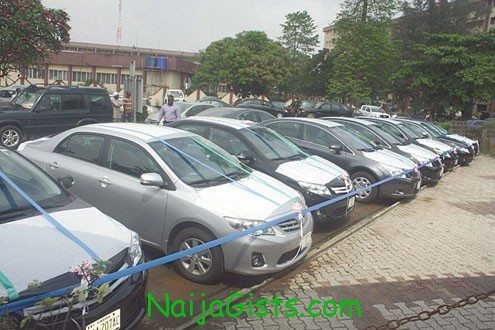 According to PM News, Lagos State government has given out eight new cars worth N46 million to obas and chiefs in the state, to assist them in the discharge of their responsibilities to the people

The beneficiaries are Ojomu of Ajiran, Ovori of Ibeshe, Olojo of Ojo, Oba of Ilashe, Oba of Ketu, Suenu of Lagos, Sasore of Lagos and Ojon of Lagos.

Commissioner for Local Government and Chieftaincy Affairs, Mr. Ademorin Kuye presented the cars to the obas yesterday at the Alausa Secretariat, Ikeja. naijagists.com

Presenting the cars, Kuye said the Babatunde Fashola administration was committed to enhancing the living standard of royal fathers in Lagos, adding that the administration believed in the sacredness of the traditional institution.

He stated that obas had an important role to play in the development of the state.

“As custodian of the traditions of our people, traditional rulers serve as a vital bridge between the people and the government. They also assist government on the vital issues of security, and as fathers of their communities, they promote peaceful co-existence and harmonious relationship among the people within their domains.

“You are therefore expected to use your influence and education to sell government policies and programmes to your people and encourage them to cooperate with government, and thereby support its policies,” he said.

“We look up to you to help in encouraging and educating the people on the need to fulfil their civic duties such as payment of taxes and rates promptly, fulfilment of their social obligations in order to pave way for rapid development, cooperation with local governments and local council development areas and others, too numerous to mention,” he added.

Is this necessary? Let’s hear your say