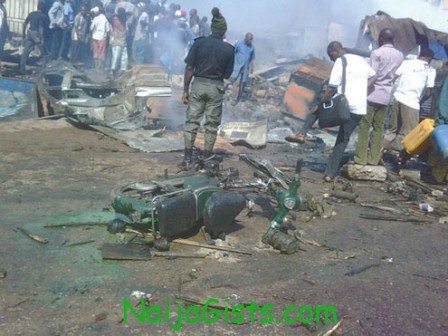 At least 7 motor spare parts traders were killed and several others severely injured in Kaduna, Kaduna State, northwest Nigeria today during an early morning bomb blast in the city. naijagists.com

According to an eye witness who escaped death by the whiskers, Sunday Anabuogu, he was with his brother in the spare parts shop along Katsina Road, by Ori Apata when he saw two men on a motorcycle threw a bag into one of the spare parts shops. “I saw two young men on a motorcycle and before you know it, they had thrown a bag into a shop. The next thing I saw was an explosion. The house collapsed on the occupants.” 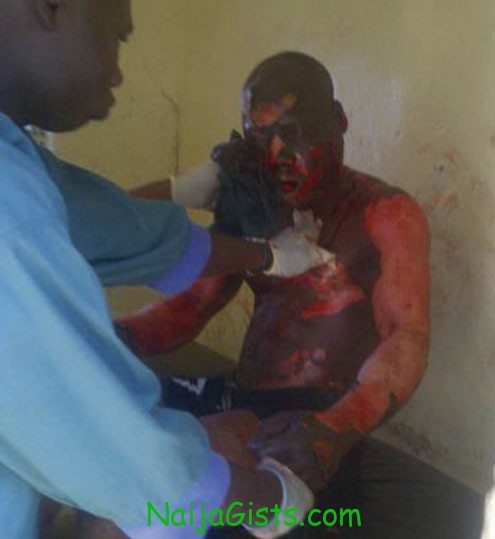 One of the victim of Kaduna bomb blast

One of the injured victims
According to Anabuogu, one of the suspected bombers died instantly while the second one who was unconscious was taken to a nearby hospital. When P.M.NEWS visited the scene, 10 shops were affected and property worth millions of naira destroyed.

As at the time of filing this report, men of the Kaduna State Emergency Agency, soldiers, police and the Federal Road Safety Corps have moved to the area and cordoned the scene of the bomb blast to put out the fire.

According to them, investigations have commenced on the cause of the explosion.

But the motor parts dealers who witnessed the blast said they suspected it was a bomb blast. They also attributed it to Boko Haram members because of the manner the two bombers who operated on a bike carried out their assignment.

Meanwhile, fire fighters were still at the scene of the explosion, battling to put out the fire as at the time of filing this report.(pm news)

What is the present administration doing in particular to curb Boko Haram.

It’s high time to voice our opinion on this sensitive issue.

If the present administration can’t handle Boko Haram, let them seek help from the international community.