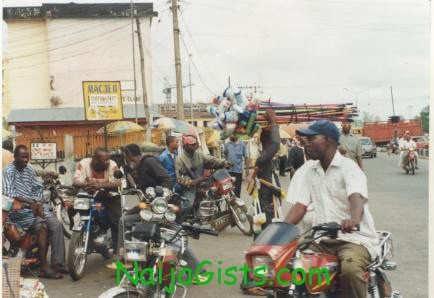 The Lagos State government may soon ban commercial motorcycle operators, also known as okada riders, in the state and restrict them to rural areas following their alleged involvement in armed robbery attacks and other vices. naijagists.com

The 32-member committee set up by Governor Babatunde Fashola of Lagos State to look into the menace posed by okada riders in the state has passed a vote of no confidence on them.

The committee submitted its report yesterday and came out with a damning report on okada riding, saying that its disadvantages far outweigh its advantages.

The Chairman of the Committee, retired Deputy Inspector General of Police, Olusegun Kazeem, was about to read the full recommendation of the committee to the governor and others present when Fashola passed a note to him to stop.

Kazeem noted that while a recommendation for an outright ban of operators in the state seemed to be the best bet to address the menace posed by operators, the challenges of transportation the development would pose in some parts of the state was to be taken into consideration.

The chairman, who did not read the committee’s recommendation, has given signal that okada riding might be ban outrightly from the city and restricted to rural areas where there are transportation difficulties.

He stated that research had shown that the vibration caused while riding on okada could lead to impotence in men and that the helmet worn by several people was a source of spreading diseases and had serious health implication.

According to the chairman, “Economically, okada has become a lucrative business for its operators who have in turn become very reckless and impossible to control with flagrant disregard for law and order.”

He said the committee also discovered that undue influence and interference was always brought on law enforcement agents by some influential people, thus thwarting attempts to enforce the law.

Kazeem stated that because the majority of the commercial motorcycle operators were migrants from other states who have no accommodation or shelter before coming to Lagos State, they have constituted nuisance in several neighbourhoods.

“Between January and November 2011, 492 robberies were committed by commercial motorcyclists while in the month of November alone, 79 armed robbery cases by okada operators were reported.”

The chairman disclosed that 1,908 commercial motorcycles were apprehended in October for traffic violations while in October and November 179 cases of accidents were recorded at the Lagos State University Teaching Hospital (LASUTH) Ikeja with 170 of them being passengers on okada.

He said records at the Accidents and Emergency Centre at the Lagos Ibadan Toll gate showed a total of 41 cases of Okada accidents between the same period while in the 20 General Hospitals across the state 1,039 accidents cases involved okada riders.

He explained that the engines of the commercial motorcycles are a source of noise and air pollution which is also contributing to the depletion of the ozone layer, stressing that there is a need to embark on quick action to reduce the pollution level.

Kazeem said the committee was convinced that the disadvantages of the operation of the commercial motorcyclists far outweighs the advantages since the injuries and crimes associated with its operation could not be compensated for.

“The incalculable cost of loss of lives, injuries and crimes cannot in any way be compensated by its economic benefits. It is the contention that the government must be ready to forgo the revenue accruing from issuing licenses and riders’ cards to operators in order to seriously confront the menace of motorcycle operators,” he stated.

Receiving the report, Fashola said the State Executive Council would deliberate on it and implement the recommendations of the committee, while appealing to residents to be vigilant, watchful and to report all suspicious movements to the security agencies.

“It is very essential that in terms of vigilance, we must increase our power of observation. We must be able to say details like complexion of a particular person, his height, shape and other characteristics.

“Members of the Neighbourhood Watch must remain vigilant to notice and report unusual happenings and occurrences in the various communities which may signpost major problems,” Governor Fashola advised, adding that his administration would do its best to ensure that law abiding people in the state go about their businesses without any form of molestation.

Attempt To Burn Down Church Foiled in Bayelsa State
Sunny Neji Humiliated,Police Undresses Him in Public At Gunpoint