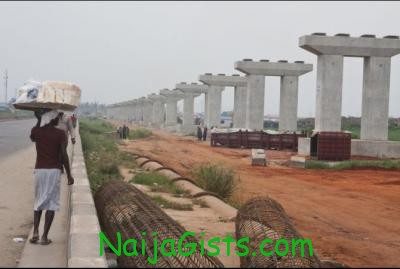 The commuters in Lagos will soon heave a sigh of relief as the Lagos State Governor, Babatunde Fashola, revealed that the first eight kilometres of the blue line light-rail project will be completed sometime next year.

The Governor, who disclosed this during an on-the-spot assessment of the first phase of the project in Orile, Alaba and Mile 2 Rail stations, said the state was working hard to deliver the project on time.

He expressed optimism that the state would deliver on the project within the stipulated time, adding that 90 percent of the structural work on the project had already been completed.

He however pointed out that the completion of the project is subject to the availability of funds.

Fashola, who was accompanied by the Commissioner for Housing and Works and Physical Planning, was taken round the project by the Deputy Managing Director of Chinese Civil Engineering and Construction Company (CCECC), Shi Hongbing.

He said he was happy that the execution of the project had provided job opportunities for hundreds of youths and would enable them cater for their needs.

Fashola also visited an uncompleted housing scheme at the French village in Badagry, and promised that the state government would ensure the completion of the project soon.

He also used the opportunity to clamp down on scores of motorcycle operators, popularly known as Okada riders, who plied one way along the Badagry Expressway.

Speaking on the menace of Okada riders in the state, the Governor insisted that operators must comply with the state regulation or leave the state.