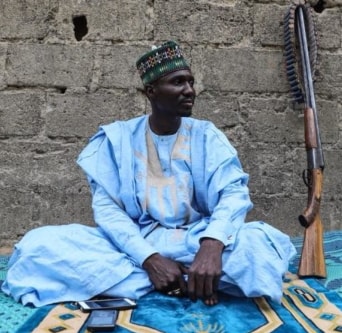 The leader of all the local hunters fighting Boko Haram in Borno state has urged the FG to arm them with good weapons to be able to combat terrorism.

According to Mai Karwina of Borno (Borno Hunters Leader), their guns are outdated and can only release two strikes.

‘I am the Mai Karwina of Borno (leader of the hunters). I was crowned 17years ago when my father died. I was 12year old. Even at the age no one made me feel like I was unworthy of being in the position. I grew up with the other hunters still I became a man old enough to lead. Borno is our home, our land. So we know where the terrorists will go and where they might hide.

And every time we go to attack terrorists, we lose one or two of our boys because we don’t have the necessary ammunition and machinery or any support from government. Our guns are outdated.

With rainy season approaching, the gun will only function for two strikes maximum and anyone can strike you dead afterwards. It isn’t a modern version. It’s difficult working like this. We need weapons. We work day and night because it’s our community but sadly there’s no support. We are hoping and desperately seeking the attention of government to provide us with the necessities. We just want to win this war’

Drama As Dino Melaye Sits Among PDP Senators, Ignores Saraki’s Order To Return To APC Seat
Olakunle Churchill: Zainab Rufai Was My Casual Girlfriend, I Wasn’t Planning To Marry Her