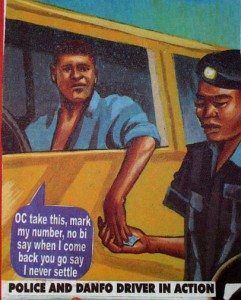 The only way to curb corruption in Nigeria is to fight it the Chinese way. In this case, anyone found guilty of stealing public funds should be made to face capital punishment. Despite the shortcomings of the Obasanjo administration, the establishment of the Economic and Financial Crimes Commission and the Due Process Office and strengthening of the Independent Corrupt and Other Related Crimes Commission in a bid to fight corruption in Nigeria will continue to take a pride of place in the history of Nigeria.

Kudos should go to the present members of the House of Representatives for their unrelenting efforts at unveiling the corruption monster which continues to enjoy a steady growth in our country, stalling the overall development of the nation, especially in the oil and gas industry.

All media houses in Nigeria also deserve commendation for keeping the public abreast of the mind-boggling revelations emerging from the ongoing probes conducted by lawmakers on the management of the subsidy funds. From the outcome of the power probe, one continues to wonder whether the EFCC and ICPC officials should not be sent to China to understudy the mechanism by which corruption is being effectively tackled and curbed in that country where there is zero tolerance for corruption. Our leaders at all levels of government in Nigeria should be compelled by law to address the fight against corruption with all the seriousness it deserves.

In China, looters of public funds are executed outright, unlike what obtains in Nigeria where their counterparts are regarded as a class of untouchables protected by one law or the other and venerated by the people themselves.

This situation has undoubtedly turned the stealing of public funds into a very lucrative business in the country. At the end of the day, much room is given to the looters to enjoy their loot without any hindrance while the way is paved for their children to continue savouring the stolen public funds for life.

Consequently, the recent call by some citizens for revolutionary ideas in moving Nigeria forward is commendable. But the bitter truth is that our nation cannot afford any revolution now as this would be too dangerous and costly, considering the teeming unemployed youths and ‘area boys’ that abound in all parts of the country. The only revolutionary thing we can do is to change our anti-corruption strategy and make it more stringent for corrupt people. A situation where the corrupt and fraudulent among us live off the honest should be stopped.

The public fund looters and money launders in our midst must therefore be made to cough up their loot, which in turn should be used to provide the suffering masses with the three basic needs: food, shelter and clothing.