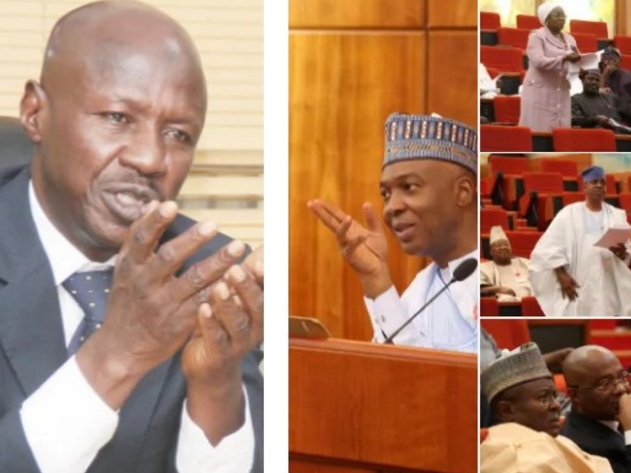 The Senate today insisted that it would not go back on the decision to reject Ibrahim Magu as Chairman of the Economic and Financial Crimes Commission (EFCC).

The Chairman of Senate Committee on Media and Public Affairs, Aliyu Sabi Abdullah, declared that rejection of Magu by the upper legislative chamber “still stands.”

The Senate spokesperson was reacting to Thursday declaration by the Presidency that Magu will remain the EFCC boss irrespective of Senate’s demand for his sack.

He spoke through Kaduna State Governor, Mallam Nasir El-Rufai, at the inauguration of the EFCC zonal office in Kaduna.

Abdullah, in his Friday’s reaction, said, “Senate has already made its resolution, and our resolutions are official statements. And most times, based on how we communicate. We don’t go to press immediately because somebody has made a statement. We usually discuss issues. You know before we made that resolution the issue was debated. It is not because the executive has said something, we will react to it. We discuss issues first.

“He was brought to us for confirmation, and on the basis of damning reports from the DSS, we rejected him twice. It is left for Nigerians to see and we have done our part.”

“We are expressing the opinion of the Senate, its stand and its position. We have given it a resolution. For now that is what subsists, and until we get a response, otherwise officially, we are not changing our words.”

Fayose To Nigerians: I Will Become Your President In 2019 By Divine Intervention
Senate Plot To Impeach Acting President Osinbajo & Replace Him With Saraki Exposed!