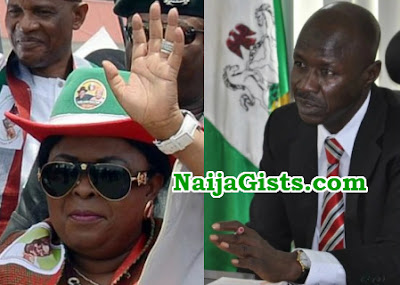 Today, the House of Representatives threatened to issue arrest warrant against the acting Chairman of the Economic and Financial Crimes Commission (EFCC), Ibrahim Magu, for shunning the invitation to address its committee on a petition filed by former First Lady, Patience Jonathan.

The Uzoma Nkem-Abonta led House Committee on Public Petition said warrant of arrest would be issued to compel Magu’s appearance on November 7.

The ex-first lady had petitioned the House over harassment and restriction on her bank accounts and that of her relatives by the Economic and Financial Crimes Commission (EFCC).

However, following Magu’s failure to appear at the continued hearing on Wednesday, the Committee said his disregard of the invitation was disrespectful to the parliament.

“EFCC has consistently absent itself from this hearing. If it were here, perhaps we would have dispensed with this investigation.

“What the EFCC is doing is not only unfair but disrespectful to the parliament,” Nkem-Abonta said.

In addition, the Committee ordered five out of six banks where Jonathan and her relations have accounts to furnish her lawyers with details and relevant document on the restriction from the anti-graft agency and the courts.

Earlier Jonathan’s representative had complained that only two banks complied with the Committee’s directive on lifting of the restriction.

According to her counsel, Charles Ogboli, the former first lady was unable to access her accounts despite the Committee’s directive and the vacationing of the restriction order by the Appeal Court.