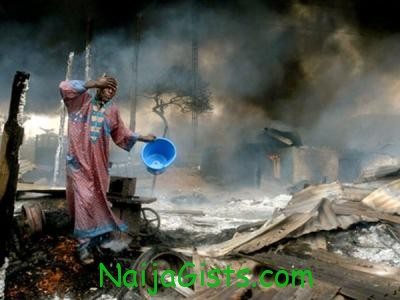 Boko Haram has been blamed for the latest bomb attack in Maiduguri, Borno State capital on Tuesday Dec 13, 2011.

According to eyewitness account, the bomb blasts were followed by sporadic gunfire.

“There was a heavy explosion in London Ciki (neighbourhood) this morning,” said Lt. Colonel Hassan Mohammed, spokesperson for a military task force in Maiduguri.

He, however, said officers of the task force have been deployed to the area to “assess the situation“.

Eyewitness accounts indicate that it was a suicide bombing. A resident who requested anonymity said he saw a car speeding toward a military roadblock ahead of the explosion. naijagists.com

“From all indications, it was a suicide attempt. We saw a man speeding towards the JTF formation and few seconds after we heard a devastating sound,” said the resident.

The bomb went off before the driver could reach the JTF formation. This is not the first time that bombers have targeted the JTF.

Residents of the area fled after the blasts as some of their houses were set on fire and the entire area cordoned off.

It is not clear who set the houses on fire. In the past, military officials have been accused of going on rampage after such blasts and razing civilian houses. No casualties have been reported in the attack yet. (daily times)