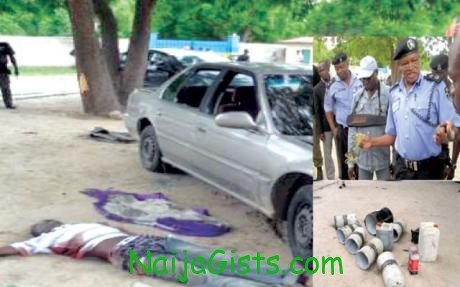 A very powerful explosives targeting a military post has rocked the troubled northeastern Nigerian city of Maiduguri on Tuesday, killing one of the attackers, an official said. Two men in a sedan drove towards the military post and sought to throw the bomb at soldiers in the restive city, which has been the epicentre of violence blamed on the Islamist sect known as Boko Haram, the official said. naijagists.com

“The explosive device detonated in his hands, killing him on the spot, while his comrade fled, abandoning the car,” said Lieutenant Colonel Hassan Mohammed, spokesman for a military task force in Maiduguri.

“We discovered ammunition in the car. No other life was lost and nobody was injured in the attack.”

Residents said the blast was followed by sporadic gunfire.

An AFP correspondent reported hearing the explosion from about 10 kilometres (six miles) away, and one resident said he saw a car speeding toward a military roadblock ahead of the blast.

“From all indications, it was a suicide attempt because we saw a man… speeding towards the JTF formation and few seconds after we heard a devastating sound,” said a resident who asked not to be named, referring to the military joint task force.

After the blast, “some houses were set ablaze and the whole area was cordoned off,” he said, adding that residents had fled the neighbourhood. (pm news)