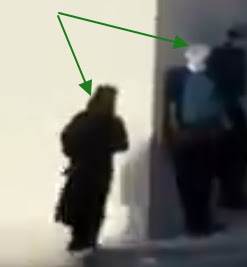 Mecca police has confirmed the arrest of a restaurant staff caught on camera speaking with a woman.

In a video footage posted online yesterday, the male restaurant worker was caught on video speaking with a woman during his lunch break.

Though it was not his fault as the woman was at fault for approaching him behind the eatery located near a school where the conversation took place, the poor man was arrested and punished.

Here is a statement Mecca police released on the matter which has since gone viral;

Watch the short footage below

So man no fit talk to woman again. This must be new.