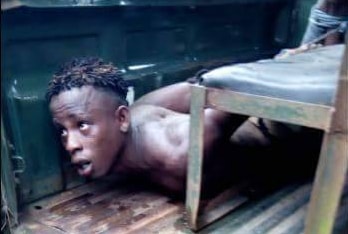 A young man identified as Ogbonna Agaezichi has been arrested for killing his mother in Abia state.

According to reports, the 22-year-old was said to be in a romantic relationship with his mother’s younger sister, Blessing.

All efforts his now late mother put to stop him from sleeping with her young sister failed until the day she murdered him.

Ogbonna was said to have passed the night with his lover on Friday night and as they were leaving on Saturday morning, his mother, Chinyere spotted them and raised an alarm on the sacrilegious relationship her son has been having with a blood relative from his maternal home.

The alarm however didn’t go well with Obinna who later attacked his mother and beat her to death.

When he realised that Mrs Chinyere has died, he fled Akpaa Mbato community.

He was later arrested and handed over to soldiers in the community.