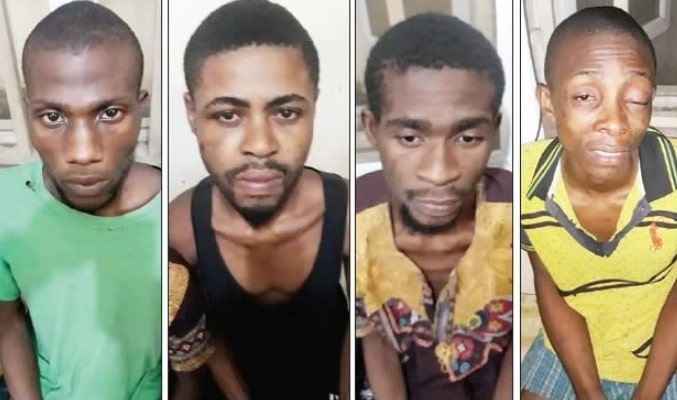 Police in Abia state have arrested a man identified as Chinindu Innocent for allegedly kidnapping a widow and the mother of his girlfriend in Ukwa W. LGA of the state.

“I reside at Aparazu Ogwu community with my cousin. The woman we kidnapped was my girlfriend’s mother. They have a telecom mast in their compound and I used to go to their house to charge my phone. I made friends with them and the woman’s second daughter became my girlfriend.

“A few months into our relationship, I discovered that my girlfriend was seeing someone else. I confronted her about it and she threatened to end the relationship. I told her mother about it but she did nothing.

“My cousin in whose house I reside in Aparazu Ogwu community approached me and sold the idea of kidnapping to me. He told me that one of his friends, known as Onyemywa, who has made money from kidnapping told him that people in the community could pay us huge money when we kidnap them. I suggested that we kidnap my girlfriend’s mother.

“The woman has been nice to me, but the misunderstanding between her daughter and I made me restless and I needed to punish her. I asked my brother to bring in his friends to kidnap the woman and we agreed that I would be on ground when she will be kidnapped.

“I did what they wanted and on the day she was kidnapped, I was at her house and we were both abducted and taken to a forest in Omuma village. My gang members demanded N1.5m from her brothers, but they ended up paying us N300, 000.”

Chinindu, however, stated that he and his brother did not get any money from the proceeds of the operation.

“The gang members who took the money refused to give my brother and me our share because they thought that the woman’s relative would pay more than they did.

“While we were still trying to get our share of the money, the police arrested my brother and me.”