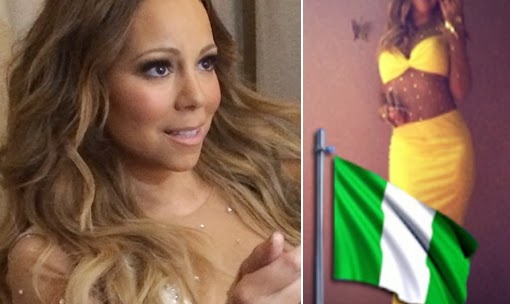 On Friday American singer Mariah Carey travelled to Nigeria for a performance sponsored by Access Bank in Lagos.

The mother of two arrived Lagos on Saturday and left for Uganda around 6:10 am on Sunday morning.

Though she didn’t spend up to 24 hours in Nigeria, a US gossip site, Radar online has blasted the singer for performing for a bank in Nigeria.

This is how Radar Online reported it:

Mariah Carey proudly posted a pic of herself in a slinky yellow dress and wrote, “Backstage in Nigeria” on Saturday.

But maybe the songbird should have done some homework before agreeing to the gig?

Her show was at Access Bank’s Christmas Party which was also a farewell bash for the bank’s managing director.

And while Access Bank is a reputable financial institution, should Carey have known a few basics about the African nation before taking the paycheck?

Ironically — given that she was performing for bankers — it seems Carey wasn’t aware Nigeria is well-known as the center of the world’s email financial crimes! Nigeria is even part of the name — as in “Nigerian 411 Scams.”

Nigeria is also, according to the United Nations, the hub of human trafficking as “a source, destination and transit country.

AND, just for good measure, there are mass killings going on in two Nigerian states right now, and according to Human Rights Watch, the violence is being ignored by federal authorities.

Mariah Carey is not the only celebrity who has taken a big hit for performing in Nigeria.

Kim Kardashian, Beyonce and Jay-z have been blamed in the past for visiting Nigeria.

May be it is time for companies to stop bringing in foreign celebrities and paying them huge cash that could save a nation.

Just like Kim Kardashian who got paid .5 million for a 45 seconds stage performance, Mariah Carey can’t be paid peanuts for spending over 5 hours in Nigeria despite the security risks and travel advisory issued by US against Nigeria.

Access Bank definitely has a lot of questions to answer.