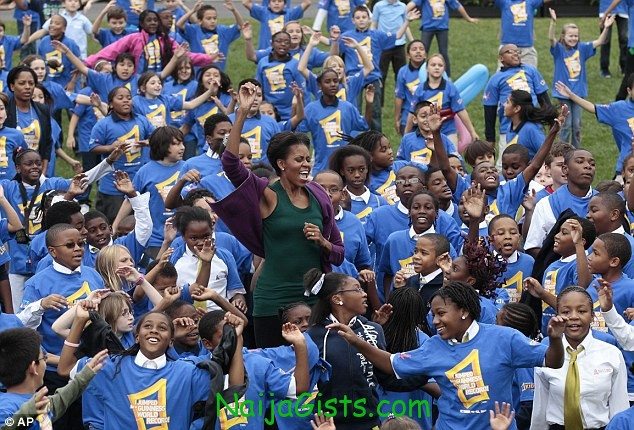 US First Lady Michelle Obama has earned her family another place in history by breaking Guiness world records. naijagists.com

The First Lady of the United States used her platform once again to inspire people to  lead healthier lifestyles. Michelle Obama, 47,  attempted to break the record for ‘Most People Doing Jumping Jacks In A 24-Hour Period.”

Michelle Obama invited hundreds of local school children to the South Lawn Tuesday oct.11 where they were  monitored by an official from Guinness World Records who signal the beginning of a 24-hour challenge.   In a video from the White House,Mrs. Obama thanked National Geographic Kids and the Guinness Book of World Records, who helped organize the event

“More than anything, I want to say, thanks to every single young person who showed that exercise isn’t just good for you, but that it’s fun too,” Mrs. Obama said.
Other jumping jack events were held around the world to reach the world-record mark. The previous record was 20,425 jumper Mrs. Obama will share the honor with more than 300,000 other (celebregion)

Topic Of The Day: Why Do Rich Nigerians Marry Only Themselves
Man Jailed For Watching Married Couple Having Sex