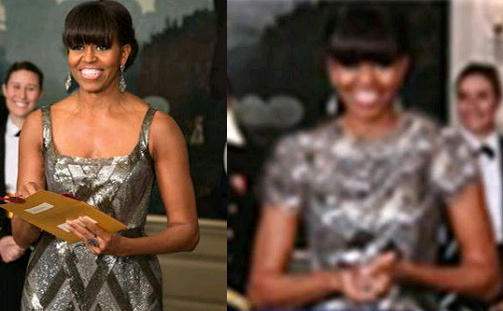 If you watch the Oscars last night, you will notice the elegant dress US First Lady Michelle Obama wore to the event.

A news agency in Iran named Fars News published a report on the Oscars but with the Photoshopped version of Michelle Obama’s dress.

In the Photoshopped version, extra sleeves were used to cover up her skin. Michelle Obama’s neckline and shoulders were raised in order to cover up her exposed chest in accordance with Iran’s Islamic dress code which forbids women exposing too much skin.

The Photoshopped version is on the right above with the original on the left.

Do you think anything is wrong with Michelle Obama’s 2013 Oscars dress?