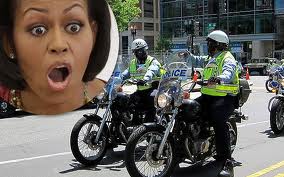 A Police Officer who is among the one protecting White House Officials is currently out of job as he threatens to assassinate US First Lady, Michelle Obama.

According to sources, the officer who works as a motorcycle escort told his fellow officers that he plans to shoot the First Lady. He even showed them the gun he intends to use for the assassination.

“We received an allegation that inappropriate comments were made. We are currently investigating the nature of those comments.” _ DC Metropolitan Police Dept

The Secret Service dept. have been contacted about the potential threat

“We are aware of the incident” and is “taking the appropriate follow up steps” – Secret Service Spokesperson.