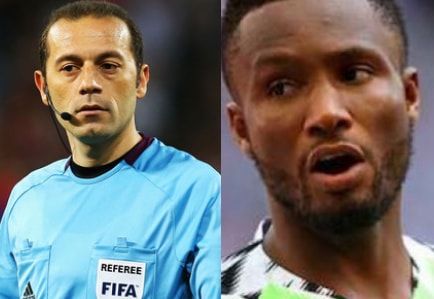 The penalty, if awarded and scored at a time the match was 1-1, could have wrapped up a second round ticket for the Eagles.

Speaking at the post match briefing in St Petersburg, Mikel said: “I asked the referee if he thought the ball struck Rojo’s hand and he said ‘yes;. The refeee told me that the ball came off Rojo’s head before it hit his hand.”

Mikel added:” I then asked Cakur why he didn’t award the penalty to Nigeria, he said: ‘ I don’t know.’ That was sad because we checked the match video in the dressing room and it was a clear penalty kick.

“When the ball touches your hand in the penalty box, it’s a penalty. No two ways about that. Maybe he didn’t want to give us the second penalty. It is sad we had to exit the competition this way.

The same referee was inconsistent. Twenty four hours earlier in the same circumstances, he gave a panelty to Iran against Portugal.

Nigerians had looked forward hopefully that Eagles would get a draw to move to the second round.

However, the Eagles failed to defend well in the crucial moments of the game. They were on the defensive most of the second half.

Lionel Messi struck early before the Victor Moses equaliser in the 51st minute via a well taken penalty. Messi’s goal was fantastic. He collected a diagonal pass from Ever Banega with his thigh, dragging the ball into position before hitting it beyond the reach of Francis Uzoho.

It could have been a brace for Messi, but 19-year-old Nigerian goalkeeper Uzoho pushed the Argentine’s terrific free kick off the far post.

Wilfred Ndidi blazed a shot over the bar in the 71st minute as Nigeria looked to put an end to all doubt.

Odion Ighalo also had two glorious chances to put Nigeria ahead but The China-based striker fluffed them to the dismay of Nigerians.

Speaking about his future with the national team, Mikel said he would be most delighted to lead the boys going further into the future.

I’m happy playing with this bunch of players. I expect them to grow into a great side and I think this team would make a good imression in the next four years. They are good boys with bright future,” he said.’Of course, we did everything we could; we pushed and pushed to get the goal but it was to be.

“We want to thank all Nigerians for their support; and we have to keep going.” [NAN]