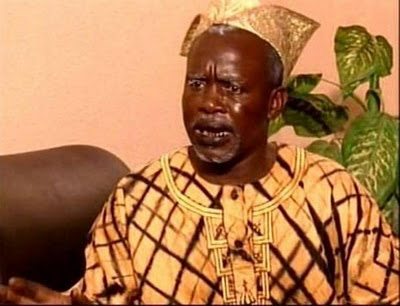 We learnt that Popular Yoruba Actor, Mufutau Ray Eyiwunmi also known as Murphy Ray got married to his sexy wife and a mother of one, Mrs Anthonia Olashile Ogunade on the 23rd of Oct, 2011 at Saint Augustine Primary School in Ijebu Ode, Ogun state Nigeria.

In this latest interview, Murphy Ray reveals the details of his delayed marriage. Read the excerpt below

When you’re disappointed by a woman you loved so much early in your life,it would take time before you can get your bearing again and when such a thing happens,people will be interpreting the situation in different ways and they will start giving that person different names.

The woman I am talking about happened to be a native of my home town,Aran Orin,Kwara State.We started dating since we were in secondary school.Later,I went to the polytechnic but what actually happened was that it was my close friend that gave her love potion.That was how our relationship turned sour.

To be honest with you,I loved the girl so much and I believed she also loved me as well and her parents were also very nice to me.The whole thing touched me and her parents also felt bad about what happened.

They begged me not to go diabolical about the issue because their belief was that if I too decided to attack their daughter spiritually,she may run mad.I personally thought about the whole thing very well and discovered there was nothing to gain in evil because I believe strongly that what happened between the two of us wasn’t natural and it wasn’t her fault but I later handed over everything to God.

If you look at our family,almost all my younger ones had married earlier.Their children are older than my only child for now.

I believe God’s time is still the best.

But the thing is just that the person I married had earlier had a child for me.What we only did was to formalize our relationship and I thank God I have broken the jinx.

Asked how and when he meet his wife,he said She is a member of my rehearsal group.That’s where we met.

We met precisely in 2003 before we now became husband and wife officially in October 2011.Since I have known her,I have not regretted my relationship with her. That’s one of the reasons I was happy to fulfill all the marriage rites on her.

In conclusion, God’s time is the best !