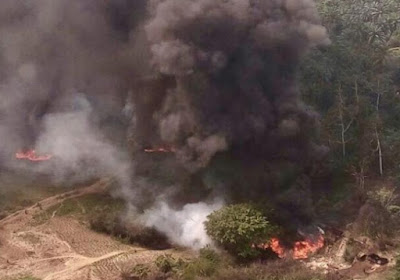 NAF (Nigerian Air Force) today said it has carried out bombings of Boko Haram targets in the North East, killing scores of insurgents through air strikes.

NAF spokesman, Air Vice Marshal Olatokunbo Adesanya, said in a statement in Abuja that the force personnel carried out several interdictions and destroyed Boko Haram structures in Bogumeri and Gwoza in the North East part of the country.

The statement which was supported with the video footage of the air strikes reads:

“A NAF platform, while on routine Intelligence Surveillance and Reconnaissance (ISR), had previously discovered the large gathering of the BHTs in the area, which was known to have significant BHT presence.

“Consequently, NAF fighter aircraft were detailed to carry out air interdiction on the target, in quick succession. The Alpha Jet fighter aircraft attacked the target with bombs, killing the insurgents and setting some structures ablaze.

“Meanwhile, in a separate attack on 28 November 2017, the NAF successfully neutralized another large gathering of BHTs in Gobara, 15km north west of Gwosa. A NAF ISR platform had previously discovered the armed BHTs, who were gathered by a building that was apparently being used as a hideout.

“The subsequent air strike resulted in the immediate destruction of the target building, killing all the BHTs inside it.”

Continue Reading
You may also like...
Related Topics:fighter, jet, naf