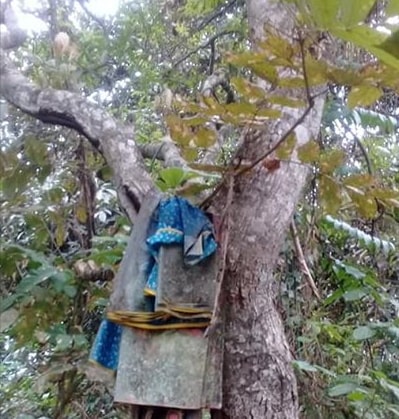 A Nigerian pastor has narrated what allegedly happened in a Nigerian family after seven brothers were deported from various countries and even had their properties seized.

According to Evangelist Emmanuel Chinonye Nnabueze, the brothers were doing well abroad before their uncle (father’s brother) visited a native doctor in the eastern part of Nigeria – to work against them out of jealousy.

The names of the brothers were allegedly written on a tree in an evil forest and all the clothes and wrappers given to their uncle – were all also hung on the tree.

“Seven brothers deported from different countries within the period of two years and not only that they were deported but have their belongs confiscated by the authorities, nobody could ascertain what is happening not even their parents.

Most of their investments in the country has been sold out to aid life, they are contemplating of selling the only parcel of the land left but how can a man fold his hands watch his children getting drown day by day, in the misdt of this confusion came their Niece with the idea of a Man of God who she encountered 2015 at St Paul Catholic Church Ebuta-Meta Lagos.

When he came to pick us, he was so jovial and lively with us, telling us how good his brother’s children has been to him even the vehicle he came to pick us with was given to him by them, he was so happy that God has finally remembered them. He even bought us full pack of bottle water when he asked us what he could get for us. He was so nice and friendly, easy going man so to say.

During the night of the prayer, he came as promised with his own children. God who nothing can be hidden before Him began to unveil the veils. Who could believe that this man is behind the tragedies that has be falling this family. He now open up to us. His anger is that his brother’s children are all doing well than his own children, so jealous and hatred crept in.

He visited a native doctor who took him to an evil forest that took us almost 6/7km trekking from the express, in that forest was a tree, the names of those children were written all over the tree, all the clothes and wrappers given to him by those children were all hang on the tree.

That was the genesis of those children’s misfortunes. To be honest I could not hold my Holy anger. I did not know when I dashed him one holy hot slap, command him to bring those clothes and wrappers down and removed their names one after the other with renunciation. Which he did.”