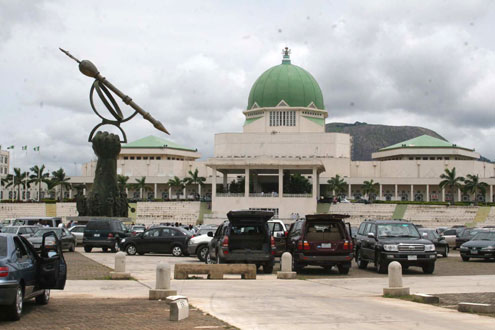 July 18, 2015 – National Assembly: The Only Remaining Nuisance And Obstacle To Change In Nigeria

As an overhaul of most systems in Nigeria happens at last, Nigerians are increasingly wondering how to do away with the last remaining vestige of destructive greed, avidity and venality: the House of Assembly. The Ebola plague of the nation that simply refuses to disappear or subside. The blow throwing, mudslinging, backstabbing, unproductive, destructive, regressive, sophomoric boors. And these are the better words to describe what is best captured by Fela’s “ni bo le leyi ti wa ti o ni okun lorun,” meaning, “where did these come from that they don’t have leashes on their necks.”

The masses have woken up, they have decided to be proactive and determined in steering their future. This was transparent in the voting out of PDP President Goodluck Jonathan along with his cabal… remember that meeting chaired by Dangote that donated billions to his campaign?, yeah, them. In spite of billions of dollars diverted for the election campaign and the billions the cabal dedicated, the masses stood together and voted them out. And they did not stop there, ever since as Buhari set on his path the masses have commented and criticized ensuring the change is real and sustained; protecting their revolution.

Team Buhari and Osinbajo are different to a fault. They have delivered. They have held to account all parastatals and restructured the revenue repatriation system, being able to raise and recover billions. They have fired filthy remnants of the past regimes in the security departments and agencies. They have set up serious committees to recover looted billions. Corruption must no longer be the brand name of Nigeria and the most critical factor promoting desperation terror and societal degradation.

But one thing remains. One bunch of people remain. They are essentially the same, as has been the curse and plague of Nigeria for the past 53 years. They are 469 in number: 109 Senators and 360 Assemblymen. Not a single one of these men is good. No one who applies for a job that covets $1 billion dollars a year from the purse of a nation engrossed in monumental suffering can be a good man. Ben Bruce makes some sense I must admit, but unless he promises to take only 10% of his allocation and to fight day and night to reduce the Assembly budget by 90%, he is just another one of the wicked gluttons.

A perplexed Okey Ndibe – one of Nigeria’s most prolific authors – proposed these senators, legislooters as they are oft called, work part time. What do they do after all? Next to nothing. One part-time operational House can easily replace the redundant two. And technology or our Ministers can replace both and will be ten times as efficient.

Nigerians have been going up in protest: #UndressNASS, #OccupyNASS, #ScrapTheSenate. Just now another one of them decided that the best way for him to disburse some of his constituency largesse was to buy camels for the people for Eid. Nigerians jumped on Shehu Sanni on twitter, lambasting him for his ridiculousness. Saraki and co have been tussling and slugging it out, desperate to rule and be the privileged ones flying private jets for $7000 an hour. Their fight is not to deliver to Nigeria, they are after all bereft of ideas. Are they not the same guys who accompanied Obasanjo and Jonathan to defraud Nigeria to the tune of billions? Many of them indicted for all degrees of theft and terror.

Nigeria has for the past 16 years lost as much as $70 billion dollars a year from enabled Niger Delta oil theft, briefcase oil dealer theft in Switzerland, authorized $10 billion –a-year withdrawals from the Excess Crude Account, Legislators, Executives and Agencies’ stupendous budget largess. Oil well sharing and nation exploiting theft (including a massive well that was gifted to our richest woman with no share for the Nigerian government). Subsidy theft and the billions stolen at all levels of government contracts among other methods used to divert unbelievable sums. The nation has run on less than $10 billion a year under the supervision and leadership of these same legislators. They are co-conspirators and directly implicated in the massive plundering of the nation and running the nation into massive debt, shame, terror and hopelessness. And they are still there, unrepentant and indignant.

So the question is: how do we the people and Buhari/Osinbajo and their decent appointees get rid of this bunch? I believe we can and I believe we will.