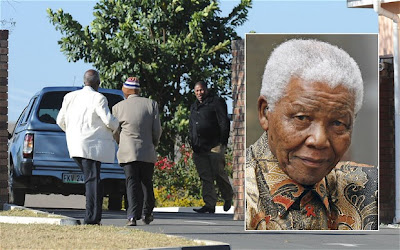 The tribal leaders of ailing Nelson Mandela have been told to prepare for his death.

According to reports from reliable sources, the 96-year-old ex-South African president has been placed on a life support machine in the hospital.

The grandson of Mandela, Mandla and a few tribal leaders are set to visit the hospital for further talks with Madiba’s family members.

According to report from South Africa, Mandela is no longer able to breathe by himself.

He’ll be buried in Eastern Cape as his family prepare for the worst.

Also there are series of tribal rituals that’ll be performed by the nation through his funeral ceremony.

As a Methodist devotee, he’ll be given a proper Christian burial.

Few days ago, President Zuma said Mandela is in critical condition. He urged the nation to pray for him.

We also learnt the daughter of the ailing hero, Zindzi Mandela told her father “Obama is coming.. He opened his eyes and gave her a smile”