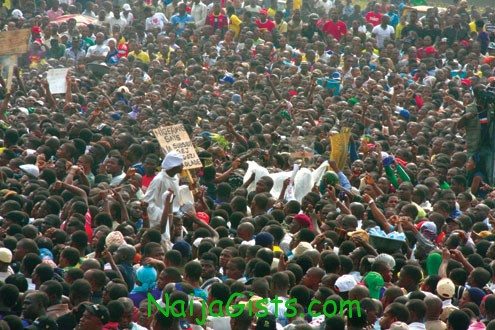 Nigeria’s trade unions say they are suspending protests for two days to allow more talks with the government.

The announcement comes on the fifth day of a general strike over the removal of a fuel subsidy, which has caused fuel prices and transport fares to double. naijagists.com

Thousands of people have taken to the streets, while several people have died in clashes with police.

The unions said Thursday’s talks with the president were “fruitful” and would continue on Saturday.

The main union organisations jointly announced there would be no mass rallies or protests over the weekend and flights would resume, enabling delegates to travel to the capital, Abuja for talks.

The oil workers’ unions had said they would cut oil production in Africa’s biggest exporter, starting from Sunday.

“We want to make sure that [on] Saturday and Sunday people – we – relax,” Nigeria Labour Congress head Abdulwahed Omar told a rally in the capital, Abuja.

“But Monday morning, it is going to be the mother of all crowds,” he said, reports the AFP news agency.

Oil accounts for some 80% of Nigeria’s state revenues but after years of corruption and mismanagement, it has hardly any capacity to refine crude oil into fuel, which has to be imported.

The government has promised to use the $8m (£6m) it spends each year on the subsidy to improve schools, healthcare and electricity supply.

But many poor Nigerians fear it will just end up in officials’ pockets, while they see cheap fuel as the only benefit they get from their country’s oil wealth.