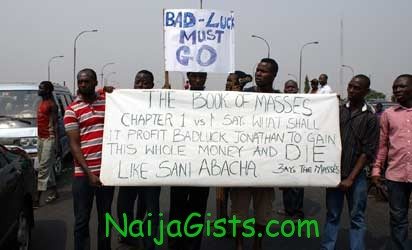 An end has definitely come to the ongoing nationwide strike action was in the offing last night after the Federal Government agreed to temporarily revert to the pre-New Year price of N65 per litre of petrol. naijagists.com

At a marathon meeting attended by President Goodluck Jonathan, organised labour, the leadership of the Senate and the representatives of state governors, labour was given two options for the reinstatement of the N65 per litre price of petrol. The first option is to revert to the pre-New Year price on the condition that the subsidy regime would be completely removed in April.

The second option is to allow the N65 selling price of petrol and withdraw 80% of the subsidy in March, meaning that petrol would sell for N120 if the current price regime remains in force.

No agreement yet — Labour

At the end of the meeting last night, labour said although compromise was being made, It has not reached an agreement and that strike continues today. All the parties would however meet again on Saturday when labour is expected to make up its mind on the options put before it.

Yesterday’s meeting was at the instance of the leadership of the Senate which had earlier held two meetings with organised labour and another with the Federal Government. Among those present at the meeting which commenced at 6.30 pm last night were Senate President David Mark; his deputy, Senator Ike Ekweremadu and Senator Victor Ndoma-Egba.

The Senate President shuttled periodically yesterday between Aso Rock and his residence where he hosted labour officials as he sought to mediate the differences between both parties.

They arrived the venue at exactly 6:30 pm, about two hours after the trio of President Jonathan, representing the Executive arm, the Senate leadership, and the governors forum had been meeting.

Meanwhile, as the series of meetings were being held by representatives of government and labour, the labour movement and its civil society allies sustained their mass protests across the states of the federation and Abuja yesterday to mark the fourth day of the strike which has grounded commercial and social activities.

The protest which also recorded unprecedented turn-out at the Federal Capital Territory, kicked off from the Berger Roundabout at about 10:45am from where the procession marched through Wuse Market, Zone 3 and 7 before it terminated at Area One junction.

It was characterized by the usual fanfare that greeted the protest since it commenced, with protesters dancing to the tunes from some musicians.

Peter Esele, TUC President exploited the opportunity of the fourth day rally to dismiss Federal Government’s accusation that labour was threatening the peace of the country.

He said labour and the coalition of civil society groups involved in the protest had nothing against the authority of President Goodluck Jonathan, but that they fault the deregulation policy which in their evaluation does not go down well with the masses.

He also dismissed allegations that politicians were wrongly exploiting the rallies to their advantage, saying they would effectively use the peaceful rallies to achieve their demands.

His words: “They say we are creating problems for this country, let us make one thing clear here, we have nothing against the presidency. All we are fighting against is the deregulation policy”.

Economic activities in Abuja were low, with transporters conveying passengers to some locations in the Federal Capital Territory (FCT), most of the banks remained closed for business, while most of the ministries’ staff were yet to comply with the directive to resume work.