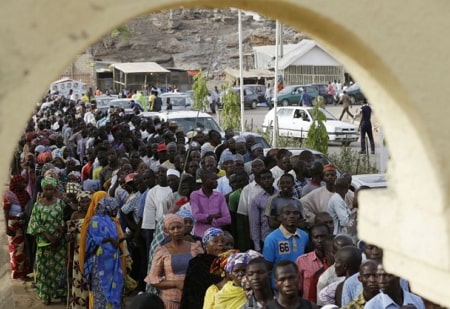 Nigerians, Before You Vote This Saturday, Remember!

In less than 48 hours, in fulfillment of our civic responsibility as citizens, we would be heading for the polls. Before then, I think it is imperative we reminded ourselves of certain salient facts before casting our votes…

Bearing in mind where we’ve been as a people, we must all remember that in 2015, among countless other promises, President Buhari promised the following;

He also promised to “restructure governance for leaner, more efficient…” running of government to discourage wastage…

Then he promised to “…bring permanent peace and solution to the insurgency issues in the North East, Niger Delta and other conflict prone states…”

In light of all these promises and more, let us not forget the situation in Nigeria as we speak…

Let us remember that the United States Council on Foreign Relations (CFR) say it has documented at least 19,890 deaths in Nigeria since June 2015, just after President Buhari assumed office.

We should also remember that the United Kingdom-based Christian Solidarity Worldwide (CSW) disclosed that “Fulani militias killed 1,061 people in about 106 attacks on communities in central Nigeria in the first quarter of 2018”.

Let us remember that the UK House of Lords has “expressed worry about the inability of the Buhari government to end killings in Nigeria”, a concern that followed a debate on the “killing of about 200 people in Plateau State by suspected Fulani herdsmen”.

Do not forget also that the CFR, an independent body of experts dedicated to providing advice on policy options facing countries, put the “cumulative deaths in Nigeria from May 2011 to May 2018 at 53,595”, even though we expected this government to stem the tide when they came on board in 2015. This statistics can be found on a section of the organization’s website, Nigeria Security Tracker (NST)…

We must also not fail to forget that in another CSW’s report, published by THISD AY newspaper, the organization said, “During the first quarter of 2018 they documented over 1000 deaths by the Fulani militia on communities in Adamawa, Benue, southern Kaduna, Kogi, Nasarawa, Plateau and Taraba states, with an additional 17 lives lost in attacks in the south of the country…

Let us remember that in the course of this administration’s lifespan, we have organized mass burials, especially in Benue State, as if there is an ongoing civil war. We must also remember the horrific pictures that came from Benue State alone during those periods.

Let us note that the CWS said, “…attacks by herder militia are currently occurring with such frequency, organization and asymmetry that the characterization as ‘clashes’ no longer suffices”

Remember the “over 400 deaths in 46 attacks during the second quarter of 2018. In one of the most recent, at least 200 people were reported to have died in coordinated attacks in around 50 communities in BarkinLadi Local Government Area in Plateau State, which began on June 22 and lasted until June 24, 2018”.

They also reported that “victims of the BarkinLadi attacks were women and children and 120 of them were killed as they returned from the funeral of an elderly member of the Church of Christ in Nations (COCIN)”!

Let us also remember the impassioned debate in the UK parliament in the course of this government, following “the murder of about 200 people in Plateau State by alleged herdsmen”, in which the House of Lords warned the Nigerian and British governments “that remaining complacent about the violent attacks could plunge Nigeria into the type of genocide that happened in Rwanda…”

Let us not forget all the killings, from the lone Redeem Christian Church woman preacher, murdered in cold blood in the street of Abuja while she went about her early morning preaching, to the endless terrorist killings…let us remember that most of these killers have not been found, that in the face of the killings that have characterized the lifespan of this administration, former president Olusegun Obasanjo said “…with the teaming of Boko Haram and Islamic State’s West African Province (ISWAP), Boko Haram is stronger today militarily than they have ever been. Boko Haram has also been empowered by the Nigerian government through payment of millions of dollars as ransom…”

Let us remember also how much the Dollar exchanged for the naira before now, how much petrol sold for per liter, remember President Buhari’s appointments, how sectional there have been, that Nigeria was once adjured the largest economy in Africa but today the headquarters of poverty in the world. Let us remember that Nigeria, which is the most populous black nation in the world, the highest crude producer in Africa, currently lacks purposeful leadership as we speak and remains the haven of extreme cases of corruption in the oil sector.

Let us also remember that in the face of all these, there are Men of The Cloak in this country, who, like the founder and early witnesses of the Christian faith, have not ceased to play the role of the conscience of the nation, and that they have indeed been speaking out…

Let us remember the words of Bishop David Oyedepo that “…a flood of evil is determined to rise against the nation by the powers of darkness, but God forbid that Christians would be found sleeping”. Christians please, remember not to sleep on Saturday.

Let us also never forget that there is a Vice President who is also a Pastor in Nigeria today, that our highly revered Pastor E. A Adeboye has maintained some type of conspicuous silence in these trying times, and that the “holy man” Pastor WF Kumuyi and his wife went  “felicitating with a man under whose watch more innocent and defenseless Nigerians, particularly Christians, have been slaughtered than any other in the history of our country…”

Let us remember the words of the late sage, Martin Luther king Jnr that “In the End, we will remember not the words of our enemies, but the silence of our friends”

Finally, Nigerians, let us remember not to forget that the 2019 general elections will provide the best opportunity for us to deal with the crisis that currently bedevils our nation… I hope Nigerians, “especially Nigerian Christians will realize that much more of the solution is in their hands than they perhaps realize…”

Citizens, if you have the chance of hiring between a suspected “thief” and another with established case of extreme dementia and unsoundness of the mind, which of them will you hire? Please remember to vote wisely on 16th February, 2018.

History Of General Elections In Nigeria From 1999 Till Date: Meet 2019 Presidential Election Contenders & Pretenders
Why Atiku ‘Chief Of Staff’, Barrister Uyi Giwa Osagie Was Arrested By The EFCC (The Untold Secret)