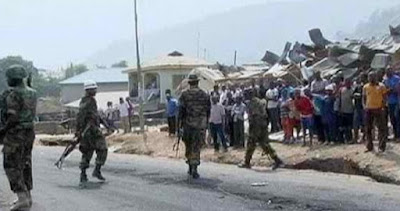 Boko Haram insurgents have launched a fresh attack on Bama city about a week after some IDP from Bama staged a mass protest to return to their town but were prevented by security agents.

A top security source said the insurgents came last night and lunched a dastardly attack on a Military/Nigeria Police Force joint guard location in the town.

The source added that a police sergeant was killed as the base was set ablaze by the daring insurgents. The source also added that the insurgents took away an AK47 rifle.

Continue Reading
You may also like...
Related Topics:base, boko haram, burn, down, military