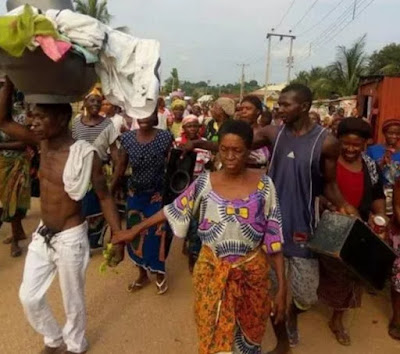 According to Daily Post, a 70-year-old widow identified as one Mrs Maria Okoh who hails from Amauzzu Nkpoghoro village in Afikpo North Local Government Area of Ebonyi State was on Tuesday banished from the community over alleged sex scandal.

The accused was also paraded in the market shortly after being caught by her grand daughter having sex with her lover on her late husband’s bed.

It was gathered that the grand daughter whose identity was yet to be known at the time of filing this report was said to have gone to her grandmother’s house to give her some food items which she bought for her.

It was further disclosed that on her arrival, she went to her grandmother’s room only to see her grandmother on the bed stack naked making love with a man in his 30’s, old enough to be her son.

On seeing the abominable act, the grand daughter who is also married, raised alarm and immediately reported the matter to the elders of the community, who in turn alerted youths of the village.

The villagers immediately dragged the widow and her lover out of the house, where they have been hiding in shame, paraded them round the community, chanting disgraceful songs behind them as punishment for their act.

A source who spoke on condition of unanimity said that it was a taboo for a woman to have sex with another man in the husband’s bed, stressing that the worst punishment was melted on anyone who continued to commits such abominable act in Afikpo.

He said that the woman would have faced a greater punishment if her husband was still alive.

He further revealed that the act has brought shame to the widow’s family, adding that the widow was among the most respected women in the community before the incident.

It was also gathered that according to the community’s custom, the woman would give three goats as fine after being paraded round the village to appease the land.

Continue Reading
You may also like...
Related Topics:boyfriend, sex, widow

Alleged Nollywood Prostitutes Anita Joseph & Angela Okorie Fighting Over A Man
Video: Davido Slaps, Beat Up Olakunle Churchill Brother For Refusing To Hook Him Up With A Girl