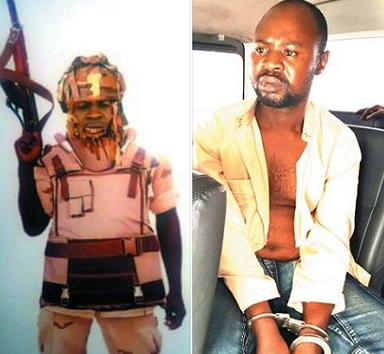 June 12, 2017 – Several Arrests Made As Boko Haram Terrorists Use Ransom From Kidnappings To Fund Operations

Some suspected leaders of kidnapping gangs, a dismissed army corporal and several suspected Boko Haram insurgents have been arrested by the Department of State Service (DSS).

In a statement released by DSS Spokesman, Tony Opuiyo, on Monday, the agency said the Boko Haram elements have intensified activities such as kidnapping and cattle rustling to finance their operations.

“The Service, in a joint operation with the military on 9th June, 2017, arrested Abdulhamid Isiaka (aka Small) and Habib Audu, at Obajana and Ibilo in Kogi and Edo States respectively. It is instructive to note that Isiaka is a Libyan returnee, who had travelled to that country alongside Abu Uwais, a most wanted terrorist.

“While in Libya, Isiaka had undergone terrorism training and also acquired a cache of weapons in preparation for attacks in Kogi and Kaduna States. He, however, became notorious and specialized in gun-running, kidnapping, armed robbery and other terror acts.

“Isiaka has made useful statements to facilitate further investigations and actions against terrorist and kidnap networks on the Abuja-Okene and the Kaduna-Abuja axis.”

Opuiyo said recent successes in DSS tactical operations included the arrest of kidnappers operating along highways leading to Abuja, adding that reports of kidnappings on the Abuja-Kaduna expressway motivated DSS operatives to arrest one Aminu Aliyu over the May 27 kidnap of an army captain, Ifeanyi Amos, along the Jaji-Kaduna Highway.

Aliyu was arrested on May 28 in Sokoto.