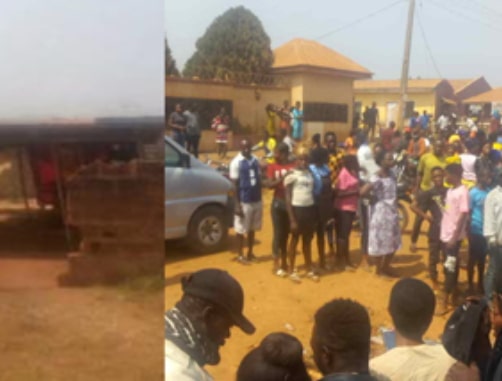 A suspected yahoo plus boy who was caught eating poop in Ekiti state has been killed.

The alleged internet scammer believed to be in his 30s became a victim of jungle justice after several failed attempts to locate people to rescue him.

According to witnesses, the man was caught eating faeces by an elderly woman who shouted to attract the youths.

He was apprehended and paraded round  town unclad before he was lynched after the youths received a go-ahead from Ado Ekiti monarch , Oba Rufus Adeyemo Adejugbe.

In his last bid to escape death, he mentioned the name of a white garment prophet who ordered him to go and eat human faeces for ritual. The  mob reportedly followed him to the white garment church at Odo-Ado area of the town, but they couldn’t find the clergyman he had mentioned.

The victim later bolted, but the mob caught up with him at Red Roof junction and set him ablaze.

The white garment church in question has been destroyed by the mob.