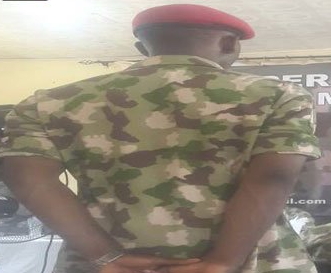 An Army court martial on today sentenced a soldier to death for killing a suspected Boko Haram militant in Borno State.

Lance Corporal Hillary Joel was convicted for killing the suspected terrorist during a cordon and search operation in Damboa local government area of the state.

The convict, according to the military court, caused the suspect’s death by “setting him ablaze.”