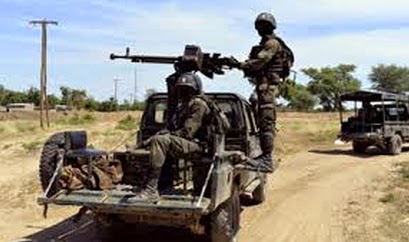 Although, no casualty was recorded by the troops and the vigilante group, but many insurgents met their waterloo in a fierce battle that lasted for hours in Gombi, which is 120 kilometres from Yola, the state capital.

The state police command confirmed that the insurgents were repelled by soldiers which resulted in the casualty suffered by Boko Haram.

DSP Othman Abubakar, the command’s spokesman, said yesterday that the insurgents tried to penetrate Gombi through Biu-Garkai road but the joint operations of the military and local vigilante contained them. He said the terrorists left the battle-field with many of their dead colleagues.

Gombi is one of the seven local government areas that were recaptured from the sect and had recently witnessed incessant attacks by Boko Haram. “The men came in from Goloso, Garkida villages through Biu Road, about 6.30pm in a motorcade and vehicles. They engaged soldiers in a gun battle,” a resident, who gave his name as Abubakar, said.

According to him, many residents fled as the shooting lasted for over two hours.

“There was pandemonium in the town, people scampered for their lives for fear of the uncertainty,” he said.

A resident fleeing the town, one Mr Bitrus Danladi, said many residents ran into the bush.” As I am talking to you, we are here on the mountain taking refuge.

“They (Boko Haram) insurgents had attempted to capture the town, so we are afraid, hence I fled with my wife and two little children,” Danladi revealed.